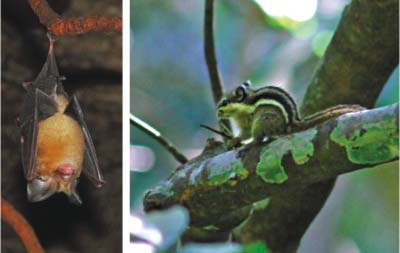 Two new species of mammals have been discovered in Bangladesh, taking the total number of mammals of the country to 124.
The Himalayan Striped Squirrel (Tamiops macclellandi) and Least Leaf-nosed Bat (Hipposideros cineraceus) are only the second and third new mammals to be found in the country in last five years.
The first new mammal, Yellow Martin, was found early this year.
Both the new species were discovered in an expedition in the remote hills of Bandarban by Dr Monirul Khan, associate professor of zoology, Jahangirnagar University in November.
“Finding any new wildlife species for the country is very rare. So the discovery of two new species is very significant,” said Dr Monirul Khan.
Usually found in India, Nepal, Myanmar and some Southeast Asian countries, the two species were never seen in the country before.
Himalayan Striped Squirrel is a small brownish squirrel with longitudinal black, brown and buff stripes along its back from behind the eye up to the base of the tail.
With a total length of only 22 centimetres (head-body 11cm and tail 11cm), the striped squirrel is now the smallest of the nine species of squirrels so far recorded in Bangladesh.
When Dr Khan found the squirrel, it was seen feeding on a large brown stick insect and moving swiftly among the branches of trees of the forest in Thaikkang, Ruma, Bandarban.
Least Leaf-nosed Bat, the other new species, is a small bat with head-body length of only 3.7cm. The body hairs are dull brown to orange in upper parts and pale to almost white in under parts.
Its wings and large external ears are dark. There is a small leaf-like structure at the tip of the nose, hence it is called ‘leaf-nosed’ bat.
Dr Khan discovered a few dozen of this species inside a natural cave near Boga Lake in Ruma, Bandarban.
In the week-long expedition, the zoology professor also found a number of rare birds including Pale-headed Woodpecker, Long-tailed Broadbill, Mountain Hawk Eagle, Striated Yuhina, Chestnut-bellied Nuthatch, Orange-bellied Leafbird, Mountain Imperial Pigeon, Maroon Oriole and Common Rosefinch.
The discovery not only proves that the country is still very rich in wildlife, but also indicates that there are many species yet to discover, said Dr Khan.
But the rich wildlife in the Chittagong Hill Tracts will not sustain unless steps are taken seriously to conserve the existing forest patches and control the hunting for meat, he said.

Tigers in the Sundarbans survive hardship

July 24, 2022 by Admin
News Desk : dhakamirror.com Tigers in the Sundarbans are in imminent danger of being hungry due to the rising spotted deer poaching. The big cats, well-known as the Royal Bengal Tiger in the southern mangrove forest of the country hunt spotted deer, monkey, and wild boar. According to a review study by the Implementation, Monitoring ... Read more

No country for elephants

March 5, 2022 by Admin
Mostafa Yousuf As if it wasn’t hard enough for elephants to survive in this country, in a tragic development, it was discovered that they are not just dying by electrocution. Shooting down the animals straight up has become seemingly rampant to protect encroached forest lands. In Cox’s Bazar, 18 elephants were shot down in the ... Read more

September 11, 2021 by Admin
Researchers have equipped snakes with tracking devices and dosimeters to measure the radiation levels in the vicinity of the Fukushima Dai-ichi nuclear power plant in Japan, in which there were three core meltdowns in March 2011 – one of the largest anthropogenic releases of radioactive contamination in history. Radiation leaks forced tens of thousands of people ... Read more

Cheetah the best sprinter on earth

August 6, 2012 by Admin
The fastest cheetah on Earth has done it again, breaking her previous world record for the 100-meter dash and setting a new best time of 5.95 seconds. This feat surpasses the fastest of all human 100-meter sprinters by almost four seconds. Usain Bolt, a Jamaican sprinter now competing at the 2012 London Olympics, holds the ... Read more

November 12, 2011 by Admin
No wild black rhinos remain in West Africa, according to the latest global assessment of threatened species, the Red List, drawn up by the International Union for Conservation of Nature (IUCN). The IUCN reports that despite conservation efforts, 25% of the world’s mammals are at risk of extinction. As part of its latest work it ... Read more

August 27, 2011 by Admin
Supercheetah The Jurassic cheetah Obaidur Rahman Paleontologist from Senckenberg Research Institute, Weimar, Germany, recently unearthed the remains of a cheetah which might just have been the bloodiest killers of the ancient times wandering at one of the oldest known habitat of human beings. It is well known that the only remaining species of cheetah, Acinonyx ... Read more

July 10, 2011 by Admin
Numbers of pig-nosed turtles have declined steeply over the past 30 years, researchers have discovered. The unique reptile has become an international conservation icon, due to it having no close relatives and being considered the turtle most adapted to life underwater in freshwater ponds and rivers. Yet demand for its eggs and meat in Papua ... Read more

‘Ants can identify their worst enemy’

July 5, 2011 by Admin
A study of the ant species Temnothorax longispinosus has revealed that it can spot its worst enemy and react with appropriate aggression. The ant colonies are often invaded by slavemaker ants, which steal their pupae. So when the ants spot a slavemaker, they attempt to kill it by biting and stinging. But the insects do ... Read more

July 5, 2011 by Admin
Ground-nesting birds eavesdrop on chipmunks in order to protect their nests, according to scientists. Ovenbirds and veeries live alongside egg-eating chipmunks in the Hudson Valley, New York, US. Researchers have found that when simulated chipmunk calls are played, the birds nest up to 20 metres further away. The study is the first to show that ... Read more

June 5, 2011 by Admin
Hunger, death on offer as forests vanish fast The number of phone calls we receive every day is amazing. People call to say fishing cats have been killed or captured. Jungle cat kittens found. Vultures lying sick. And of course, tigers have been killed. If we put together all these pieces of information, we get ... Read more

March 31, 2011 by Admin
Sea turtle routes tracked The first turtle that was tagged in Bangladesh with a satellite chip to track its journey last year has travelled over 12,000 kilometres in 357 days and is now coming back to Bangladesh coast from Sri Lanka. Urmee, the name of the turtle, has crossed the path until March 23, 2011. ... Read more

March 6, 2011 by Admin
More than 10,000 endangered whales and dolphins of six species have made the Bay of Bengal and the Sundarbans estuary a safe home, a month long survey reveals. A group of Bangladeshi wildlife scientists headed by Dr Anisuzzaman Khan carried out the survey and recently revealed that the Bay is still a good abode of ... Read more

March 3, 2011 by Admin
The effective population of the critically endangered Amur tiger is now fewer than 14 animals, say scientists. Approximately 500 Amur tigers actually survive in the wild, but the effective population is a measure of the genetic diversity of the world’s largest cat. Very low diversity means any vulnerability to disease or rare genetic disorders is ... Read more

February 26, 2011 by Admin
A rare species of goose was spotted for the first time in the country in Hakaluki Haor of Moulvibazar district last Saturday. A group of bird watchers led by eminent bird specialists Dr Enam al Haque and Paul Thompson have found the ‘lesser white-fronted goose’ on the concluding day of the two-day bird enumeration session ... Read more

February 6, 2011 by Admin
Birds living around the site of the Chernobyl nuclear accident have 5 percent smaller brains, an effect directly linked to lingering background radiation. The finding comes from a study of 550 birds belonging to 48 different species living in the region, published in the journal PLoS One. Brain size was significantly smaller in yearlings compared ... Read more

January 30, 2011 by Admin
Asia’s tiger reserves could support more than 10,000 wild tigers – three times the current number – if they are managed as large-scale landscapes that allow for connectivity between core breeding sites, a new paper from some of the world’s leading conservation scientists finds. The study, co-authored by WWF scientists, is the first assessment of ... Read more

November 25, 2010 by Admin
St. Petersburg, Russia: The historic International Tiger Conservation Forum ended with crucial plans to discuss further financing options for the Global Tiger Recovery Programme approved at the meeting, kick-starting new efforts to double the number of wild tigers. On the final day of the summit, delegates met briefly to hammer out key dates in the ... Read more

Over 1,000 Tigers Killed In Past Decade

November 10, 2010 by Admin
The illegal trade in tiger parts has led to more than 1,000 wild tigers being killed over the past decade, a report suggests. Traffic International, a wildlife trade monitoring network, found that skins, bones and claws were among the most common items seized by officials. The trade continues unabated despite efforts to protect the cats, ... Read more

October 13, 2010 by Admin
A group of Montana researchers working with the United States military has proposed a new, unique answer to the ongoing global epidemic destroying honey bee colonies: A fungus and virus working in tandem, aided by mites, may be the cause. The ongoing honey bee deaths are widespread, causing losses in the USA, Europe and Asia. ... Read more

September 7, 2010 by Admin
Oriental vultures are disappearing so fast that their population dropped by 95 percent in Bangladesh in the last two decades, due to feeding on carcasses of cattle treated with anti-inflammatory drug diclofenac, said experts. Diclofenac is widely used in human medicine globally, and was introduced to the veterinary market in the Indian subcontinent in early ... Read more