Beautiful jhau woods along the beach now a torture to eyes 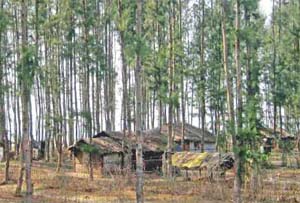 The jhau woods along the Cox’s Bazar seashore are in decline, putting the future of the world’s longest sea beach in jeopardy.
Setting up of illegal structures, indiscriminate felling of jhau trees[tamarisk], and leasing of land adjacent to the beach stand out as contributing factors to the decline of the woods.
Around 1000 people, mostly Rohingyas, are living in two slums and a village inside the jhau forest that stretches over a four-kilometre area from Naziratek in the north to Hotel Sea Inn in the south, locals said.
These people are not only destroying the forest to build structures and collect firewood but are also polluting the environment by leaving urine and excreta on the open space very close to the beach.
On a recent visit to the area, this correspondent found that unplanned toilets had been set up beside the walkways along the beach, filling the air in the area with a fetid stench.
Locals said the illegal dwellers had managed to live in the woods by bribing a section of the forest guards and police, and some officials in the district administration.
Admitting the existence of the illegal settlements, Additional Deputy Commissioner of Cox’s Bazar Syed Md Nurul Bashir said the local administration undertakes regular drives to evict these illegal dwellers inside the jhau forest.
Such drives would be conducted again, he added.
Meanwhile, a band of influential persons have leased the jhau forest, intending to construct concrete structures, hotels and the like in the area.
But the site falls in the ecologically critical area (ECA), where any type of construction is prohibited by Bangladesh Environment Conservation Act 1995 (amendment 2010).
This correspondent recently viewed the nameplates of Liberal Democratic Party chief Oli Ahmed and former secretary Hasanat Abdul Hye attached to the boundaries of two pieces of land fenced by corrugated sheets inside the jhau woods at Diabetic Hospital point.
On the land leased by Abdul Hye, a tin-shed house was erected inside the boundary where a caretaker lives. Several jhau trees were felled indiscriminately during the process.
The Daily Star ran a report on February 22, 2012 titled “Oli’s Castle on beach”.
Oli Ahmed, communications minister in the BNP government between 1991 and 1996, had been allotted a five-katha plot in the jhau woods on the beach near the airport during the tenure of the four-party government in 2002, according to the report.
He had signed a deal with Impulse Properties, a real estate company, to construct the building, and unveiled the foundation stone of “IPL-Sandcastle” in November 2010, the report added, quoting a signboard attached to the site.
The Department of Environment had barred an attempt to build a multi-storey structure on the land leased by Oli Ahmed, said Sardar Shariful Islam, assistant director of the DoE in Cox’s Bazar.
In spite of that, the present signboard speaks the same language as reported by The Daily Star in 2012, with no change in its approach.
There is another signboard attached to the fence of a grabbed piece of land adjacent to the beach that reads “Bangladesh Police Kalyan [welfare] Trust”.
When contacted, officials of the district administration said they had not leased any such land to the police trust.
Fazlul Kader Chowdhury, president of the Bangladesh Poribesh Andolon (Bapa) in Cox’s Bazar, expressed concern over the mindless destruction of jhau forest.
He demanded that the jhau woods be saved from the clutches of influential quarters and illegal dwellers.