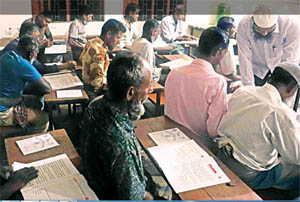 “I never knew there’s so much beauty and fun hidden inside a book,” said 44-year-old Salma Begum, who learned to read and write very recently.
“I had to blindly trust anyone who could read to let me know the contents of important documents. Now I’m self-sufficient in that regard, and use my own signature instead of thumb impressions,” added a delighted Salma.
This has been possible for a special programme going on at Pattashi Model Government Primary School Centre in Pirojpur’s Indurkani upazila.
People aged 15 to 45 years and above – devoid of the opportunity for education in their early years – are being provided with reading and writing lessons at different learning centres in the upazila under the “Basic Literacy Project”, run by the ministry of primary and mass education and supervised by Bureau of Non-Formal Education.
The project is being carried out in 114 upazilas under 64 districts and is currently in its second phase.
In Pirojpur, the programme is being run in Indurkani and Nazirpur upazilas.
“My afternoons were usually filled with gossip sessions with neighbours. Now I have finally found something productive to do with the free time,” said Tuli Begum, who has been taking regular two-hour lessons at the centre in the afternoons, the designated time for women learners. She has already made good progress with reading and writing.
“Our school and college-going children also help us at home with reading and writing when we face trouble,” said Nasrin Begum, another learner.
“I come from a low-income background. My parents married me off at an early age, and I didn’t get an education,” said Farida Begum. “But now I realise its necessity, and so I’m pursuing it.”
The same enthusiasm was seen among the male learners as well.
“Now I don’t have to depend on others with necessary documents,” said Md Afser Ali Sheikh, who has already mastered reading and writing.
Hanufa Akter, a teacher at the centre, said, “The women are very eager learners. The programme has initiated a transformation among the learners in general.”
“It is a bit difficult to teach the elderly. But I enjoy it fully,” said trainer Md Shafikul Islam.
Non-government organisation Rupashi Bangla Unnayan Sangstha (RBUS) is implementing the project in Indurkani. The ongoing programme started last December and is expected to end within the next six months.
Under the project, 15,120 people are being taught in 502 batches at 252 teaching centres in the upazila.
“We expect to eradicate illiteracy in the upazila upon completion of the programme,” said Azad Hossain Bacchu, executive director of RBUS.
Shamal Chandra Roy, programme officer of the project in Pirojpur, said it is a good initiative by the government.
“We are monitoring the project closely. Those getting the opportunity will be greatly benefitted after the programme’s completion,” he added.