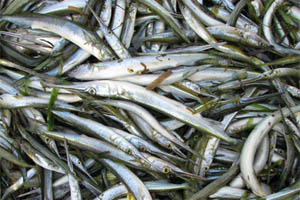 Freshwater garfish, known as Kakila in Bangladesh, once found in open water bodies, especially in rivers, canals, haors etc., is a delicious fish that is rich in nutrients, but now it is almost extinct, due to the effects of climate, natural disasters and various man-made habitats, damage to breeding grounds and the number of the fish began decreasing drastically. Although its found in some areas in the region, the quantity is very low.
Hopefully, scientists from the Freshwater Sub-station of the Bangladesh Fisheries Research Institute (BFRI) in Jessore have succeeded in adapting this open water fish to the closed environment and inventing artificial breeding techniques.
The fisheries scientists got this success after three years of intensive research under the core research activities of the institute led by Bangladesh Fisheries Research Institute (BFRI) freshwater substation, Jessore’s Chief Scientific Officer Dr. Md. Rabiul Awal Hossain, senior scientific officer Md. Shariful Islam and scientific officer Shishir Kumar Dey.
BFRI scientists say “We can expect the Kakila will roam in the water again instead of fearing its extinction… This is the first artificial propagation of Kakila in Bangladesh, and no information was found about this fish being artificially bred anywhere else in the world.”
The scientists concerned said that kakila or kakhle is an endangered fish. Its body is slender, its lips are long and its teeth are sharp. The variety found in Bangladesh is freshwater garfish. The fish is known as Kaikala, Kaikka in most parts of Bangladesh. Its scientific name is Xenentodon cancila.
Apart from Bangladesh, the fish is also found in Sri Lanka, India, Pakistan, Myanmar, Malaysia and Thailand. However, there are some differences in color and size.
The Research team chief and chief scientific officer Md. Rabiul Awal Hossain said, ‘Kakila’s body is long, slightly compressed and almost cylindrical in shape. These are 25 to 30 cm in length. A red apex is seen on the top of the head of an adult male fish, from which female and male fish can be easily distinguished. In addition, the body of the male fish is thinner than the female fish and a little smaller in size. It is a predatory fish and eats mainly small fish. It breeds in naturally flowing water bodies, especially in rivers and in flooded areas during monsoons. Mature fish live in places where there are no floating aquatic plants, but their females lay eggs under the leaves and floating roots of aquatic plants.
The research team said ‘Kakila brood (mother-father fish) is collected from the Padma river in Kushtia adjacent to Rajbari district and released into the pond at the freshwater sub-station of Jessore after ensuring oxygen supply in a special method.
Later, the fish were accustomed to the confined environment of the pond by feeding live carp fry of hatcheries and small live fish collected from various reservoirs.
From May this year, following the scientific protocol, a certain number of mother and father fish were given hormone injections in different doses in the hatchery of the sub-center for the purpose of artificial insemination.
Even though trials of different doses were given several times, there was no success in fish breeding. Finally, on August 25, the eggs hatched and the artificial propagation of the kakila fish came to fruition. ‘
Rabiul further said that PG (Pituitary Gland) hormone was used for the propagation.
On 18 August, four pairs of parents fish were selected from the pond and the pairs werre put together in a pond with a water hyacinth place. After about 48 hours, the mother fish lays eggs.
The various stages and development of the foetuses inside the eggs were monitored regularly with a microscope. The eggs hatch within 90 to 100 hours of hatching.
According to the researchers, per 100 grams of edible kakila fish contains 18.1 per cent protein, 2.23 per cent lipid, 2.14 per cent phosphorus and 0.94 per cent calcium, which is much higher than other small fish.
Bangladesh Fisheries Research Institute Director General Dr. Yahya Mahmud said, “The Fisheries Research Institute has already achieved success in artificial insemination of 30 of the country’s 64 endangered fish.” Kakila was added as the 31st fish in the series of successes.