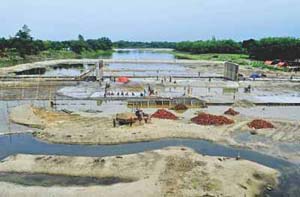 An inflatable rubber dam being built on the Atrai river in Dinajpur will be completed by the end of this year, facilitating irrigation using surface water instead of underground water as well as fish cultivation.
The dam — 135-metre long and four-metre high– will create a 44- km long reservoir in the river that usually dries up in the lean season.
In this of type of dams, cylindrical rubber fabrics are placed across channels, streams and weir or dam crests to raise the upstream water level when inflated. Agriculture extension officials say around 7,000 hectares of land in nine unions of two upazilas in the district will be irrigated using water from the reservoir for cultivation of rice and other crops.
Besides, the reservoir will facilitate round-the-year fish cultivation in the river.
Till now, about 5,000 hectares of land in the areas are under the irrigation system using underground water. But continued depletion of underground water causes problems every year.
Against this backdrop, implementation of the project involving more than Tk 15.54 crore began in December last year. The initiative for creating the reservoir for use of river water for irrigation was taken by officials of the Local Government Engineering Department (LGRD), and the Department of Agriculture Extension (DAE) in Dinajpur.
Farmers and fishermen in five unions in Dinajpur Sadar upazila and four unions in Chirirbandar upazila will benefit from the dam. The unions are Sheikhpura, Fazilpur, Sasra, Uthrail and Shankarpur in Sadar upazila, and Saitara, Abdulpur, Bhiyail and Auliyapur in Chirirbandar upazila.
DAE Deputy Director in Dinajpur Anwarul Alam said irrigation using river water would be a big boost for farming in the areas since underground water level continued to fall.
Conatcted, Md Mokhlesur Rahman, LGED executive engineer in Dinajpur, said construction of the dam was progressing steadily for completion within this year.
Meanwhile, farmers in the areas appear upbeat about the rubber dam. Md Altaf Uddin, a farmer from Mohanpur village in Sadar upazila, said, “When the dam is completed, we will able to irrigate our lands with the river water. Depleting groundwater was causing problems for us every year.”