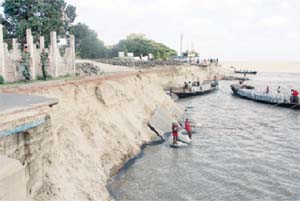 ABOUT 75-metre stretch of town protection embankment in Sirajganj was washed away by river Jamuna on Wednesday night.
Locals and Water Development Board officials said that the concrete part of the guide-wall as well as its
adjacent road on the embankment began to be eroded at about 10:00pm on Wednesday and the erosion continued till Thursday morning.
The erosion was, however, controlled after six-hour efforts through dumping concrete blocks and geotextile sand bags by the local people and the water board men along with the army, Rapid Action Battalion and police.
The local administration officials, including deputy commissioner Md Bellal Hossain and sadar upazila chairman Abu Mohammad Golam Kibria, rushed the spot and monitored the emergency protection work on the embankment on Wednesday night.
A number of erosion-hit people alleged that in front of the local administration and journalists that the embankment was being eroded frequently due to faulty repairing work by the water board, although the board continued bathymetric survey.
The local water board executive engineer, Md Sajedur Rahman Sarder, however, said that the 2.5km embankment had been constructed between 1995 and 2000 and the design was not appropriate according to the reality, nature and course of the river Jamuna.
After the construct, the embankment had been eroded two times before it was handed over to the board, he said, adding that the embankment had also been eroded on several occasions in the last three years.
If the the design is not revised considering the present nature and course of the Jamuna, it would be tough enough to protect the embankment from sever current of the river, he observed.
‘Although conduct bathymetric survey very often, the river Jamua is always an un-predictable river,’ he added.