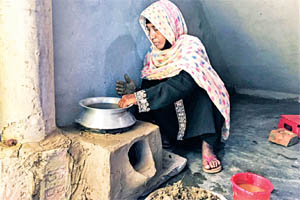 Fourteen years ago, Kabuljan Begum developed an environment-friendly oven to keep herself and her family safe from air pollution caused by open-fire ovens.
Her solution has now become the go-to choice for hundreds of others in the rural areas of Rajshahi region, covering three districts of Rajshahi, Naogaon and Chapainawabganj.
From her remote village in Horidebpur in Rajshahi’s Tanore upazila, some 36 km off Rajshahi city, 55-year-old Kabuljan Begum visits village after village every week to make her ovens for others.
Officials of Bangladesh Resources Centre for Indigenous Knowledge (BARCIK) said according to their records of her activities since 2017, she has developed eight types of ovens and visited 85 villages to make over 5,000 ovens.
“Her oven is simple, cheap and it ensures a healthy kitchen,” said Amreto Kumar Sarker, a programme officer of BARCIK.
Its specialty lies in filtering carbon by using a chimney made with earth or cement and an earth-made perforated cap. The chimney and cap requires frequent cleaning, the official said.
According to WHO, 260 crore people across the globe use ordinary open-fire ovens, which produce harmful black smokes that can cause pneumonia among children, heart diseases, asthma, and lung diseases, leading to death of some 40 lakh people worldwide.
During a recent visit to Kabuljan Begum’s Horidebpur village, this correspondent saw her returning from a business trip to a neighbouring village.
“I’ve never imagined that an oven can fetch me this much popularity,” Kabuljan said. “The families bless me when they sense how easily they can get rid of black smoke and dirt from ordinary ovens by switching to mine.”
The idea started its journey in 2008, when development workers took the concept of “Bandhu Chula” (environment-friendly oven) to her village. But back then, Kabuljan could not afford one for her family.
One day, she asked her husband to collect some clay and concrete pipes to build an oven and its chimney.
“The first oven cost me Tk 500. It worked really well. Then I re-developed it for my convenience,” she said.
Her oven burns with all types of firewood, straws and fallen tree-leaves. It causes no harm to the cook or anyone else in the house and lasts long, she said.
Witnessing her using the oven, neighbours started asking her to make some for them, and this is how started production on a broader scale.
Soon enough, she had covered, by foot, 250 households in her neighbourhood and made her ovens for them.
After that, words started spreading beyond her village. Her stature kept growing as her role in alleviating household air pollution drew the attention of the local administration, which led to her attending several local innovation fairs.
In 2014, she received the Joyeeta award for her efforts.
Assisted by BARCIK, she started visiting distant villages and indigenous communities since 2017.
So far, she has travelled to Paba, Tanore, Godagari, Mohonpur, Niamatpur, Nachol, Manda upazilas and even the slums of Rajshahi city in Sreerampur, and Namo Bhadra areas. Since 2009, Kabuljan has built some 10,000 ovens.
“Whoever calls me, I visit them. Sometimes, I invite people over too,” Kabuljan said.
Such is her dedication to the cause that whenever she goes to a village to make an oven, she also trains women there, all to spread the oven’s use.
Her family members are also happy for the role she plays for society.
“The oven is so simple that I can use it while she is away,” Kabuljan’s husband Mobarak Hossain said.
The family’s neighbour Bani Rani Sutradhar was the first to have an oven made by Kabuljan. “We’re really happy that we found a way to get rid of smoke inside the house,” she said.