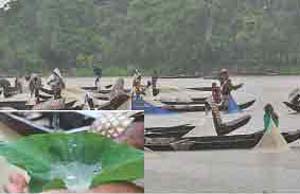 Hundreds of spawn collectors with their boats and nets started collecting released eggs of indigenous species of carps from the Halda river in Chittagong for the second time this year, ignoring incessant shower yesterday morning.
The Halda, which flows through Hathazari and Raozan upazilas, is one of the world’s major natural sweet water fish breeding spots.
It is also the major source of carp fishes like ruhi, katol, mrigel and kalbaush in the country.
Heavy rain accompanied by thunder bolt and strong water current from the hills create suitable atmosphere for mother fishes to release spawn in the river between April and June.
Fishermen expect that a good amount of spawn will be collected this time. Their collection was poor during the first phase of spawning in the river on April 8.
Experts believe bulk amount of eggs could not be collected during the first phase due to lack of current in the river.
Spawns collected from the Halda grow faster than other eggs nurtured in commercial hatcheries, and fishermen wait for the season every year to collect spawns by mud-made scoops.
After collecting the eggs from the river, fishermen nurture those in the mud-made pots for around 18 hours. After 96 hours, the eggs transform into fries which are then sold to the fry collectors or hatchery owners.
Halda spawns meet most of the demand for fish fries across the country, experts said.
Badiul Alam, a fisherman of Maduna Ghat, told The Daily Star yesterday that they collected very poor quantity of eggs in early April.
“At first, we thought we would not get more eggs this year. But, today, I collected five buckets of eggs from the river,” he said.
He expected that fishermen would be able to collect a good amount of eggs in the second phase of spawning.
Prof Manzoorul Kibria of Zoology Department of Chittagong University told The Daily Star fishermen caught around 40 to 50 kgs of eggs per boat yesterday.
“In the first phase, only 4 to 5 kgs of spawns were collected by each boat which was very poor,” he said.
Prof Kibria was monitoring spawn collection by fishermen amid heavy shower in the morning at Hathazari.
“Heavy river current and shower with thunder bolt have created congenial atmosphere for mother fishes to spawn in the second phase,” the Halda researcher added.
Extending his thanks to the fisheries department and law enforcement departments for their role to prevent catching of mother fishes, he said the amount of spawn would increase in the river if the authorities concerned took proper steps against the industries which were causing pollution in the river.
Mohammad Jahed, a hatchery assistant of fisheries department, said yesterday fishermen collected good number of spawns due to suitable atmosphere in the river.
He also said they would be able to count the total amount of collected spawns within few days.
Enamul Haque, inspector of Raozan Police Station, told The Daily Star that they have kept their eyes open to prevent illegal fishing in the river.
According to the fisheries department, the quantity of fish fry has reduced significantly due to illegal fishing in the river. Only 217 kgs of fish fry were collected in 2003, 150 kgs in 2005, 218 kgs in 2009, a steep decline from the 5,000 kgs collected in 1945.
Different types of man-made hazards like overfishing, construction of rubber dam and sluice gates, industrial wastes are destroying the ecology of the spawning ground, said Prof Kibria.