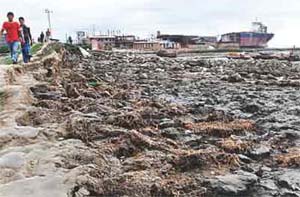 Rampant deforestation on the coastal green belt at Sonaichhari union of Chittagong’s Sitakunda upazila for establishing ship breaking yards is causing the breakdown of
the union’s embankment.
Subsequently seawater from the Bay of Bengal is inundating the adjoining villages at every high tide, causing immense suffering to the residents.
Nityananda Jaladas, resident of one of the villages, Ghoramara, said the whole coastal area was a big government forest just three to four years ago.
“With the trees available, the embankment had not collapsed. But nowadays, since there is no tree, the embankment is breaking down everyday,” he said, adding, “During
high tide, seawater floods our houses, damaging our belongings.”
Bangladesh Forest Department started afforestation of mangrove species in Sonaichhari from 1976 to develop a coastal green belt. From 1989 onwards, the department
planted Kewra trees on 125 acres of coastal land, said sources.
But after 2007, Chittagong District Administration and the assistant commissioner (land) leased out land, assigned for the coastal green belt, for the establishment of
ship breaking yards.
Since then, rampant tree felling went on in the area.
On July 3, 2009, some 15,000 mangrove trees were felled under the instruction of some influential quarters who wanted to set up at least four ship yards. On November
29 that year, another 5,000 trees were chopped down, said locals.
On a visit to Ghoramara, this correspondent found the embankment in a dilapidated condition, with its bricks, boulders and stones coming loose and scattered around.
Only 10 Kewra trees were seen standing and the locals feared those could be felled anytime.
Two tin-shed houses were also found with two signboards. One read “Site for Nowshin Steel” and the other “MSS Steel Recycling”. This correspondent could not trace any
industry in Chittagong by the names.
Another resident, Khorshed, also stated that the embankment’s destruction was being brought about by the destruction of the area’s forest.
He urged the government to construct a durable embankment to save agricultural lands and houses of the area from high tide.
The benefit of coastal afforestation is that the tree roots help hold the soil together, which in turn keeps coastal embankments firm, said Divisional Forest Officer
Sunil Kumar Kundu of Coastal Forest Division, Chittagong.
The plundering of the coastal forest and land grabbing, as in a domino effect, is leading to the gradual breakdown of the embankment, he added.
Echoing Sunil, Water Development Board Executive Engineer Swapan Kumar Barua said ship breaking yard owners, at different times, were felling trees intensively in the
area.
“Saving the embankment, farmlands and coastal people’s lives from seawater requires a restriction on ship breaking activities. Coastal afforestation should be
immediately started again in the area,” he added.

August 15, 2022 by Admin
An environmental group called Bangladesh Environment Forum alleged Sunday that 120 hills had vanished from Chattogram city in the past forty years. The port city’s hills decreased from 32.37 square kilometers in 1976 to 14.02 square kilometers in 2008, according to a written statement from the forum’s general secretary, Aliur Rahman. He was addressing during ... Read more