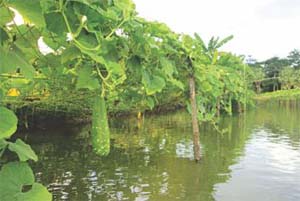 Defying the onslaught of salinity that had long been affecting rice cultivation, a farmer in Pirojpur is now excelling in fish and vegetable farming, setting an example for others to follow.
“Making profits from the combined farming of fish and vegetables is a total shift from the loss era of rice farming,” said Azizur Rahman Mollah alias Hanif, 50, of Uttar Mithakhali village in Mathbaria upazila.
He told The Daily Star that they have 24 acres of land, and rice cultivation was traditionally their main works. But with increased trendof salinity in the region, rice productivity declined.
“So, we thought to do something innovative. The first idea was fish farming,” Hanif said, adding that he then created a gher (enclosure) on 1.8 acres of land in 2007 by spending only Tk 1.5 lakh, and started fish farming the following year.
Initially, Hanif cultivated different species of carp fish. With the experiences gained, he found tilapia farming more profitable. So, for the last two years, he has been cultivating hybrid tilapia fish, which grows faster than the carp species.
Four to five tilapias make a kilogram that is now sold to the wholesaler at Tk 100. With proper feeding, it takes a tilapia three months to gain a weight of around 200 grams.
“Tilapia cultivation earned a profit of Tk 2 lakh last year. This year I have cultivated about 1.25 lakh hybrid tilapia fish at a cost of Tk 10 lakh. I am expecting to make a profit of more than Tk 25 lakh,” said Hanif.
That’s not all. He utilised the boundary of the enclosure by planting vegetables including papaya, bean, brinjal and bottle gourd.
Vegetables growing on the boundaries of the enclosure earned him Tk 50,000 last year, and this year he expects even more.
With the increased profits, Hanif is now creating another enclosure on 3.6 acres of land adjacent to his present enclosure.
“I face no major problem in fish farming as I always seek assistance of the local fisheries department,” he said, adding that jobless youth could go for fish farming.
Oliur Rahman, district fisheries officer, lauded the farmer’s sincere efforts, saying: “Hanif could be a glaring example to the local people.”