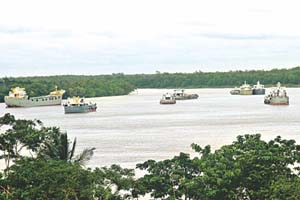 A temporary water transport channel through the Sundarbans has turned into a regular route over the last two years as the authorities concerned have yet to restore the navigability of the original route.
Subsequently, the ecosystem and wildlife of the forest are being seriously disturbed by the daily movement of around 150 motor cargo vessels coming from Chittagong, Dhaka and even India.
The temporary route was arranged for only three months to carry goods to Mongla Port and Khulna in April 2011 after Bangladesh and India had renewed their Protocol on Inland Water Transit and Trade.
Ships coming from Haldia Port in India have been using this channel under that protocol as the original Mongla-Ghasiakhali route was silted up.
The Bangladesh Inland Water Transport Authority (BIWTA) was supposed to dredge 15 kilometres of the channel to restore its navigability by June 2011.
The incumbent government allocated Tk 76 crore to restore the route, but the BIWTA has not yet begun the work. Insiders say they are about to give the work order now.
The Ghasiakhali channel was developed in 1974 as a shortcut to reach Mongla, bypassing the core forest. The route stretches through the Mongla river to Sannyasi to Morelganj to the Baleshwar river.
Before this shortcut was developed, ships had used the Sundarbans channels since British colonial times. That old route has resumed as ships from the Bay of Bengal now use the Baleshwar river to enter the Sundarbans.
The routes through the Sundarbans include Nandabala, Chandpai, Harintana, Mirgamary, Andermanik, Tambulbunia, Dudmukhi, Terabeka, Supoti and Bogi — all disturbing the reserve forest.
Boatmen, forest dwellers and forest officials say the vessels use hydraulic horns which are much above 50 decibels, the highest noise limit allowed by the Noise Pollution Act, 2006, in the reserve forest area.
Sources in BIWTA say 75 percent of the vessels using the forest come from Chittagong to Khulna. The ships that fall under the India-Bangladesh treaty are mostly Bangladeshi cargo vessels importing goods from India, they add.
Dozens of conventions, bilateral treaties, national policy, rules, guidelines and acts prohibit such activities that may harm the forest and its biodiversity.
“We don’t know what kind of goods those vessels carry. What will happen if any of those vessels sinks with harmful chemicals on board?” observed the eminent tiger expert Monirul H Khan.
A cargo vessel loaded with chemical fertilisers capsized in the forest a few months ago.
The eastern part of the forest is rich in biodiversity compared to the western part. “But it is now hard to find wildlife along the river route thanks to those vessels’ movements,” Monirul said.
The government should immediately stop the route, he added.
The Sundarbans is not only home to the largest number of Bengal Tigers in a single forest, its rivers provide sanctuary to four species of river dolphins, including the Gangetic and Erawardy.
The Ministry of Environment and Forest on several occasions in vain wrote to the Ministry of Shipping asking it to stop such unauthorised movements.
“It has been two years now. They have not only kept using the route but also made it one of the busiest water routes in the country,” said a forest official, requesting anonymity.
Insiders at the Department of Forest say poachers now get ready transport to pursue the hunting of animals like deer, tigers, crocodiles, pythons and geckos.
According to the Wildlife Division of the Department of Forest, 11 tigers were found dead, while 41 were killed in the Sundarbans in the last 16 years. Poachers have also killed thousands of deer and other endangered animals.
Wildlife experts say there are a number of dolphin sanctuaries in the mangrove forest, including Kotka, Hiron Point, Kutikhali, Dublarchar and Alor Char areas, but dolphins currently avoid these areas due to disturbances triggered by the running vessels.