50,000 hectares of forest lost in a decade to encroachment 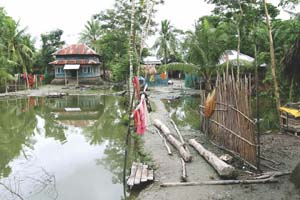 Encroachers have deforested nearly 50,000 hectares of the Sundarbans in the last decade,
a study has found.
This means the world’s largest mangrove forest spreading over 6.01 lakh hectares area has lost 8.3 percent of its northern front between 2000 and 2010.
The study, done by the Soil Research Development Institute (SRDI) and published last month, revealed this alarming picture by comparing the forest’s aerial images taken by a satellite throughout the period.It says the forest land was mainly converted to shrimp farms, gradually penetrating deep into the Sundarbans around Mongla and Bagerhat.
Shrimp farms in the area more than doubled during this period — from 45,596 hectares in 2000 to 96,283 hectares in 2010, according to the study, titled “Trends in availability of agricultural land in Bangladesh”.
Khorshed Alam, director of SRDI, has said the deforestation is less noticeable from the ground, but its extent is all too clear in the satellite images.
“Trees are felled so as to make small pocket clearings so that it is not noticed. However, the aerial view shows there are many such clearings. Our research team has covered almost one-third of the Sundarbans and came across several of them,” he told The Daily Star.
But he added that the figures had to be verified through investigation on the ground.
According to a recent report in this newspaper, forest officials of Chandpai range seized timber worth Tk 10 crore in the last six months. And this is just one example of the level of deforestation.
Human encroachment on the world’s largest mangrove forest has particularly increased after the cyclones Sidr and Aila — which left many coastal villages economically dry.
One would not miss the evidence of regular destruction of the forest. Villages are slowly creeping up on the edges of the forest every year and gradually proceeding inwards.
Haldebunia is one such village that popped up in the last one decade by razing the mangroves on the way from Mongla to Chandpai.
“Just two decades ago there was no village on the other side of the Khorma river,” said Noor Alam, vice-chairman of Mongla municipality. “Haldebunia was built by clearing the forest in the last decade.”
The village under Sundarban union has about 450 voters now.
The Khorma used to separate humans from the beasts of the jungle 20 years ago. But it has now dried up to a sliver that can be crossed on foot, The Daily Star correspondents saw during a visit last month.
Rustam Bepari, another villager, said the land where he built his house was government khas land and was allocated to him two years ago. He claimed he did not clear the forest to settle there.
Several other villagers echoed the same.
Living near the forest has changed their food habit, at least partly. For instance, Rustam’s daughter Sonia was picking a round green fruit. “This is keora. It’s sour and we cook it with shrimp. It grows all over our backyard and everywhere in the village.”
Keora is a species native to mangrove forests and a favourite food of deer. People usually do not eat them, except for those who live there.
Destruction of the Sundarbans began in 1770, when the British rulers started agricultural expansion. Its first map, prepared at that time, showed that the forest spread from Khulna to Kolkata.
If the present trend is not reversed, it could be reduced to a regional folklore within the next century.