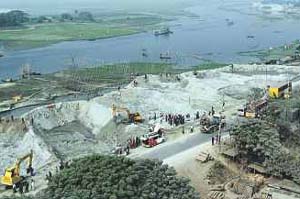 In a drive against river grabbing often under the cover of sand trading, the Dhaka district administration yesterday removed heaps of sand from the foreshore of the Turag river, but did not arrest or fine anyone.
Administration officials, who conducted the drive at Sinnirtek in the capital’s Mirpur, said they did not find the grabbers. But this correspondent found on the spot four people who admitted doing sand trade there.
All the four men claimed they were lawful owners of the foreshore, and alleged the authorities were “illegally harassing” them. One of them, Haji Bashar of the area,
claimed he was doing the business on his own land. The other three would not give their names.
Bizarrely enough, Selim Hossen, executive magistrate of Dhaka Deputy Commissioner’s office, who led the drive, said: “The perpetrators are yet to be identified. Local
people are saying that they do not know anything about them. But we are trying to find them out.”
Yesterday’s was the first day of a three-day drive against river grabbing, being conducted by the Dhaka district administration and Bangladesh Inland Water Transport
Authority.
In most cases, sand trading is used as the means of permanently grabbing river lands.
“We will continue the drive in phases to protect the river,” said Selim.
But environmentalists and locals are sceptical about the outcome of the drive. They argue similar drives in the past came to nothing and the grabbers, soon after their
eviction, resumed the business with full vigour.
Over the last few years, sand traders, many of them with strong political backings, have gone wild to fill up rivers, canals and other water bodies in and around the
capital. Occupying rivers or any other wetlands is an offence punishable under the environment law but the culprits go scot-free, thanks to their power of money and
muscle.
“The grabbers are chocking the Turag by filling up its foreshore with sand. If the river dies, it will severely affect the environment and human lives,” Bangladesh
Paribesh Andolon Joint Secretary Sharif Jamil told The Daily Star yesterday.
Around 300 feet of the river’s foreshore and bank have been filled up by grabbers. The Turag’s width at Sinnertek point may be 80 to 100 feet now, he added.
Vast areas of the four rivers surrounding the capital — Balu, Shitalakkhya, Buriganga and Turag — are dotted with white sandy patches, a sign of continuous filling
of river lands with sand.
“After every drive, the grabbers remain quiet for a week or so. We guess they return to grab the river through underhand dealings with the administration,” said Ali
Akbar, an employee at a shop at Sinnirtek.
Magistrate Selim does not disagree. He says the grabbers return to their old business due to lax monitoring by the government bodies concerned, for which he partly
blames the shortage of manpower.
He sought cooperation from the community people, environmentalists, social workers and journalists in resisting the encroachers.
Yesterday’s seized sand, about 1.80 lakh cubic feet, was sold in auction at Tk 3.33 lakh. Thirty pipes used for piling and some 350 bamboos used for occupying the
riverbank were also seized and sold.
“This will send a message to the illegal traders,” added Selim.
But Abu Naser, chairman of Paribesh Bachao Andolon, thinks otherwise. According to him, “The government, by setting up the river-boundary pillars well inside the
river, has created abundant opportunities for the grabbers to fill up the foreshores.”