Cabinet Okays River Protection Bill
River commission to have little power
It can only recommend measures; greens doubt its effectiveness as grabbing, pollution go on 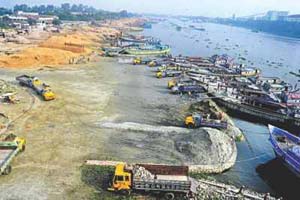 In the wake of river grabbing and pollution, the government is forming the National River Protection Commission which will only make recommendations but have no statutory power of implementation.
Green activists, who have long been pressing for a single river authority, say just another recommending body would not do any good.
The government has a legal obligation in this as the High Court on  July 19, 2009 ordered forming a commission which would be the highest authority in protecting rivers.
The cabinet at a meeting at Bangladesh Secretariat yesterday gave the final nod to the draft of National River Protection Commission Act, 2013 to form the commission. The meeting was chaired by Prime Minister Sheikh Hasina.
The commission will advise the government and coordinate the activities of ministries involved in management of water and river, Cabinet Secretary Muhammad Mosharraf Hossain Bhuiyan said.
Briefing reporters after the meeting, the secretary also said the river commission will be made of a chairman and four members, including hydrologist, environmental expert and lawyer.
A new commission will be formed every three years and it will submit the annual report to the president by March 31 every year.
The National River Protection Commission Act will help the government take legal action to protect rivers from encroachment, pollution and unscrupulous use of rivers as well as other water bodies, Mosharraf said.
However, environmentalists doubt if the commission will make any difference.
“Nobody consulted me about the law,” said Syeda Rizwana Hasan, the chief executive of Bangladesh Environment Lawyers Association.
It was her petition following which the High Court directed the government to form the commission.
“If the commission is just another recommending body without any statutory power, it would not be able to take any action if any decision is not implemented,” she said.
Rizwana called for an open discussion before the placing of the draft in parliament.
Columnist Syed Abul Maksud said this commission will just work as a government office, not an independent institution. “It will fail to work properly because it got no statutory power.”
The government already has 14 authorities and agencies involved in different aspects of river management.
These bodies, lacking coordination, have failed to agree even on the number of rivers crisscrossing the country.
As per Bangladesh Water Development Board the number is 259 while a publication of Bangladesh River Institute puts it at 312. According to the 2010 chart of Bangladesh Centre for Environment and Geographic Information System, there are 405 rivers in the country.
In reply of a question, Water Resources Minister Ramesh Chandra Sen told parliament a few months ago that at least 97 rivers were dying due to the lack of water flow during the dry season.
Shipping Minister Shajahan khan at a programme on Sunday said the country has lost over 20,000 kilometre of river transport route out of 24,000km because of loss of navigation over the years.
Talking to the BBC Bangla Service yesterday on the proposed commission, Tohidul Anwar Khan, former member of India-Bangladesh Joint Rivers Commission, said many positive recommendations were not implemented in the past.
“Still,” he observed, “the initiative to form the commission will help create awareness to some extent.”
Back in 2009, the High Court also directed the government to demarcate river banks, set pillars along the river areas and stop pollutions.
It also ordered immediate steps to dredge the Buriganga, Turag, Balu and Shitalakkhya rivers around the capital and remove the dirty materials deposited in the riverbeds within the next two years.
The court also asked the authorities to dredge Jamuna-Dhaleshwari, Dhaleshwari-Buriganga, Old Brahmaputra-Bangshi, Bangshi-Turag, Jamuna-Punglikhal, Turag and Tongi canals within five years.
The government on sever occasions pledged to stop river grabbing and pollutions.
Interestingly, during the implementations of the decisions, public officials have virtually encouraged encroachment along the shorelines of the river Buriganga and Turag through conducting “controversial and improper” surveys.
Bangladesh Paribesh Andolon (Bapa) and Green Voice last year urged the prime minister for taking necessary steps to stop the setting up of demarcation pillars in an unfair manner along the four Dhaka rivers, and to remove the encroachers.