Run by battery, they are more prone to accidents; they gain access by bribing cops 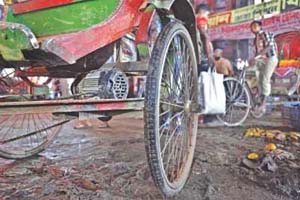 Battery-run rickshaws are plying many Dhaka streets flouting a government ban as the law enforcers turn a blind eye to it, allegedly taking bribes from the rickshaw owners.
Officials at Bangladesh Road Transport Authority (BRTA) said controlling rickshaws in city is beyond their jurisdiction as those are run manually.
Saiful Haque, director (engineering) at BRTA, said according to the features of a rickshaw, it can run on a speed of 5-10km per hour.
“When a motor is attached to it, its speed capacity increases up to 40kmph. The original design of a rickshaw and its brake capacity are not fit for running on this speed. Thus the battery-run rickshaws are more accident-prone,” he added.
Battery-run rickshaws are totally illegal and unauthorised as the government had imposed a ban on it in May, 2011, said Md Fashiullah, deputy chief revenue officer at Dhaka North City Corporation.
“These rickshaws were banned by the government because they are not safe. Traffic police regularly helps us drive out these vehicles from roads,” he noted.
The erstwhile Dhaka City Corporation had issued licences to 86,000 rickshaws till 1982. No new licences have been issued since then, mentioned Fashiullah.
Talking to The Daily Star, rickshaw pullers in Dhanmondi, Mirpur, Pallabi, Karwan Bazar and Tejgaon said traffic police allow them to drive battery-run rickshaws on roads when they produce a “special” token.
Owner of a battery-run rickshaw, Faizur said, “I’ve to pay Tk 800 every month for this token. With this, I can drive in Dhanmondi, Hazaribagh, Mohammadpur and Adabor areas. If I go beyond these areas, the token won’t work and the traffic police would seize my vehicle.”
He was carrying a laminated plastic card, issued by Digital Rickshaw Owners’ Association. It contained a mobile phone number, expiry date stamp and a signature of the issuer.
When The Daily Star called the phone number, one Anis said they “manage the law enforcers” to run the battery-run rickshaws in the above four areas.
A similar system was in place at the Tejgaon Industrial Area. A rickshaw puller at Karwan Bazar said he rented the motorised rickshaw from Madhya Kunipara at Tejgaon Industrial Area.
Showing a sticker on the back of his vehicle, he said, “Though during daytime I can drive only at Tejgaon Industrial Area, after 10:00pm I can drive anywhere in the city.”
“The owner of the rickshaw pays a monthly fee of Tk 1,000 to Nazrul, a rickshaw garage owner in Tejgaon, to manage the law enforcers,” he added.
Now, there are about 3,00,000 rickshaws, including the battery-run ones, in the capital, according to Alam Khan, president of Dhaka City Corporation Rickshaw and Van Owners Oikya Parishad.
Of them, 20 percent are battery-run, with the highest number operating in Mirpur and Pallabi areas.
Sramik League, the ruling Awami League’s workers’ wing, forms committees and make arrangements with police on a monthly basis to issue illegal tokens and save the battery-run rickshaws from being seized, mentioned Alam.
Seeking anonymity, a Sramik League leader said they have received complaints from different quarters about some Sramik League men managing the law enforcers for allowing battery-run rickshaws on city roads. “We’ve also found that some outsiders are also involved in managing the law enforcers. We’re looking into the matter,” he added.
Contacted, Mir Rezawul Alam, joint commissioner of DMP (traffic), denied the allegations that the law enforcers received bribes and issued token licence to allow battery-run rickshaws ply the city streets. “At times, battery-run rickshaws are seen in the alleys. Police seize those rickshaws if they see one,” he noted.