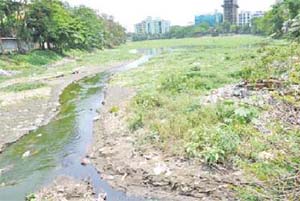 Gulshan Lake and its surroundings continue to be polluted as household wastes and sewage find their way into the water body.
Local people and environmentalists have alleged that for lack of enforcement of law and proper planning the
lake is continuously getting polluted.
Habibur Rahman, a resident of Gulshan 2, blamed the authorities for inadequate
initiatives to save the lake.
With the city experiencing development every day, its water bodies are shrinking and the Gulshan Lake is the best example of how the negligence of the authorities concerned leads to the wretched condition of a water body, he said.
Shafiq, a vendor of the area near Airtel office, said household wastes have continued to be dumped in the lake though the city corporation officials often come to clean hyacinth from the lake water.
He said people who have walks beside the lake have to bear the bad smell and step over rubbishes littered on the walkways but no initiative has been taken to address the problem.
Near Gulshan 1 there are some outlets of Dhaka Water Supply and Sewerage Authority and from them sewage get into the lake, causing pollution in its water and endangering biodiversity.
Besides, blockades of bamboos have been erected in the lake by Partex Group near Gulshan 1.
Bangladesh Paribesh Andolan secretary general Abdul Matin said DoE test the lake water quality by collecting samples from six different points but to know the reality no test and sample is needed at all.
With open eye any laymen can say easily how polluted and stinky the lake water is, he said.
He said the Department of Environment in 2001 declared the lake a critical environmental area.
But the DoE did not take any single measure to protect the water body from pollution and illegal encroachment, he said.
Environmentalist Iqbal Habib said to save the existing water bodies coordination among public and private organisations was a must, otherwise pollution and encroachment would never stop.
Rajdhani Unnayan Kartipakhya has a three-year project named ‘Gulshan-Banani-Baridhara Lake Improvement and Beautification Project’ which got ECNEC approval in 2010 and is supposed to end by June 2013.
The Tk 410 crore project aims to protect the lake from illegal encroachment, improve natural flow, water conservation capacity, and beautification of the lakeside, said Rajuk engineer and project director Nurul Islam.
According to the plan, he said, Rajuk would build a 2.5-kilometre driveway along the eastern side of the lake, starting behind Gulshan Shooting Club and ending at Mariam Tower just behind the USA embassy in Dhaka.
Rajuk engineer said low grade officials of the Bangladesh Telecommunications Company Limited dump household wastes into the lake water and some of them are directly involved in illegal encroachment on the lake near the Korail Slum.
However, Department of Environment director (metro) Maududur Rashid Safdar told New Age that they had asked the project’s steering committee to identify the problems so that DoE could take step to stop pollution in the lake.
He said DoE was willing to help Rajuk keep the lake clean and pollution-free.