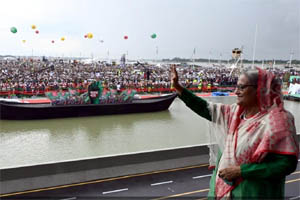 Prime minister Sheikh Hasina inaugurated the Padma Multipurpose Bridge on Saturday.
The prime minister unveiled the inauguration plaque of the much-anticipated 6.15 kilometre Padma Bridge for vehicular movement at 11:58am at Mawa end.
Speaking at the auspicious moment of inaugurating the bridge, an emotion-choked prime minister remembered Bangabandhu Sheikh Mujibur Rahman and the family members killed heinously on 15 August 1975 and freedom fighters who laid their lives to liberate the country in 1971.
She greeted all the people involved with the mega project including late professor Jamilur Reza Chowdhury.
She said this is not just a concrete structure rather this bridge is the epitome of the nation’s pride and competence.
Sheikh Hasina congratulated the people of the country on the occasion of the inauguration of the bridge.
She also mentioned various ordeals including conspiracies her government went through during the construction of the bridge.
After the speech, the prime minister unveiled commemorative postage stamps, commemorative currency notes to mark the grand opening of the country’s biggest self-financed mega project.
Later, a replica of the bridge was presented to the prime minister Sheikh Hasina.
Cabinet secretary Khandakar Anwarul Islam led a munajat before the inauguration of the bridge.
The bridge will bring massive progress in road connectivity of 21 south and south-western districts with the capital Dhaka and other major cities.
The total allocation is Tk 301.93 billion (30,193.39 crore), but the allocation for the main bridge is Tk 121.33 (12,133.39 crore) (including Tk 10 billion (1,000 crore) for the installation of 400-kv electricity transmission line and gas line).
Besides, the Tk 94 billion (9,400 crore) was allocated for river training works, Tk 19.07 billion (1,907.68 crore) for approach roads (including two toll plazas, construction of two buildings for police stations and three service areas),
Tk 15.15 billion (1,515 crore) for the rehabilitation of the displaced people (caused by the project) and Tk 26.98 billion (2698.73 crore) for land acquisition.

October 18, 2021 by Admin
The Dhaka University campus was full of students as face -to -face teaching restarted yesterday after it was closed for 18 months due to the Covid 19 outbreak. The students of DU that has been vacant for a year and a half rushed now everywhere on the campus such as classrooms, libraries, seminars and cafeterias. ... Read more