JATRABARI FLYOVER
No specific date for completion of work 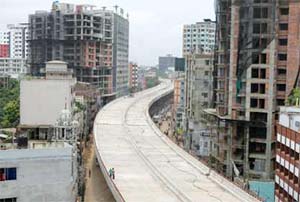 After missing out on several deadlines, the government seems unwilling to give a specific date for commissioning of the under-construction Gulistan-Jatrabari flyover, apparently due to slow pace in the project implementation.
Slow progress of construction forced the local government division to postpone the opening of the flyover by prime minister Sheikh Hasina scheduled for March 26, according the officials.
‘The construction of the Gulistan-Jatrabari flyover would be completed soon. But we are not giving a specific date for opening the flyover to the traffic,’ LGD secretary Abu Alam Md Shahid Khan told New Age.
He, however, ascertained that prime minister Sheikh Hasina would inaugurate the country’s longest flyover, being implemented under the local government division, during her tenure that ends in January, 2014.
The construction work is yet to be completed even three months after the latest deadline with the construction firm Orion Infrastructure Limited attributing the reason to the delay in relocation of electricity lines from the project area. A senior official at the local government division said that around 20 per cent of the work was yet to be completed.
The secretary said the construction of the 10-kilometre flyover, named after former Dhaka mayor, the late Mohammad Hanif, involved huge tasks of relocation of utility supply lines underground and overhead.
He agreed that it took time to establish coordination among various authorities in relocation of electricity, gas and water supply lines in the busy areas under the Dhaka South City Corporation.
Several deadlines were missed in the last eight years in implementing the much-hyped project initiated to ease the chaotic traffic on the long road stretch from Gulistan to Jatrabari. Commuters tangled in snarls suffer for hours every day in the densely-populated Jatrabari area, a major gateway to the capital city.
The three-year flyover construction project that began in July, 2010 could not be completed in time reportedly due to lack of coordination among the authorities concerned and slow pace of work by the construction company.
Almost half a dozen deadlines the government had set to complete the flyover have been missed since the construction contract was first awarded in March 2005 to the Orion Group on build-own-operate-and-transfer or BOOT basis.
The construction company claimed in a meeting at the local government division in early June that 82.5 per cent work of the flyover had been completed and the whole work could be completed by July 30 provided that the overhead electricity lines were shifted from the project area, said an official.
The project was initially estimated to cost Tk 610 crore. Construction was stalled by the military-backed interim government in 2007 over corruption allegations.
After taking office in 2009, the AL-led government brought changes in the flyover design and its length several times.
The government also did not make public the enhancement of the project cost three times to Tk 2,053 crore due to intense lobbying by the Orion Group.
The construction firm blamed the delay on political unrest and barriers like bus terminals and other physical infrastructures at a number places along the project site.
The flyover would span busy areas of Gulistan and Jatrabari in the capital city and link the port city of Chittagong, Sylhet, Comilla, Narsingdi, Chandpur, Noakhali and Feni.