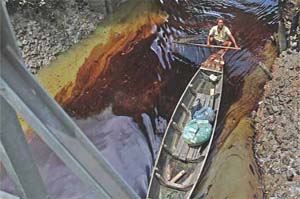 The furnace oil, spilled from three wagons of a freight train derailed at Boalkhali in Chittagong on Tuesday, poses a serious threat to the aquatic creatures living in the river Karnaphuli, and its surrounding biodiversity.
The three oil tankers contained around 1,00,000 litres of furnace oil, around 33,000 litres each, the railway sources said, assuming that fifty percent of the toxic oil containing in the three tanks might have been spilled into the adjacent canal leading to Karnaphuli. Manjurul Kibria, associate professor of the department of zoology at Chittagong University, said fishes feed on phytoplankton and zooplankton found on the surface of the water, which would be destroyed by such a volume of toxic oil spill.
It would take toll on the entire food chain of the aquatic creatures, he said, urging the authorities concerned to take measures to remove the oil immediately.
Black furnace oil, mainly used in industries including power plants, was seen floating in the canal adjacent to the derailment spot, and in the river Karnaphuli yesterday.
Karnaphuli researcher Muhammad Edris Ali, also an associate professor of Chittagong College, said the layer of oil in the river would affect the photosynthesis.
“The spill in the river will definitely cause a shortage of the dissolved oxygen,” he said, adding that fishes would either die or migrate from the river under the impact.
The locals from adjacent Barua Para, Pathan Para, Sheikh Para and Jele Para were also seen collecting the oil from the canal and adjacent water bodies.
The railway officials were seen busy trying to salvage the derailed tanks. But no step was taken to stop the toxic oil from being spread into the river.
Sukumar Bhowmick, divisional railway manager, said they would decide about the removal of the oil after salvaging the derailed tanks.
The Bangladesh Railway (BR)-east zone has formed a three-member committee to probe into the matter.
The committee headed by Chittagong divisional transportation officer Zakir Hossain was asked to submit the report within three days, Sukumar added.
The railway officials primarily suspected the derailment had occurred due to the lack of maintenance of rail tracks, and the overweight of the cargo train.
A railway high official, on condition of anonymity, said the BR had been carrying 5 tanks of oil to Dohazari Peaking Power Plant on every alternative day since October 1, 2011.
Later the BR had to carry 8 tanks on every alternative day due to pressure from the power plant officials.
From this month, it has started carrying 8 tanks everyday to increase production of electricity to ease power crisis in the month of Ramadan.
Three tankers of a Dohazari-bound cargo train derailed at Baruapara area in Boalkhali upazila while carrying furnace oil for the peaking power plant.