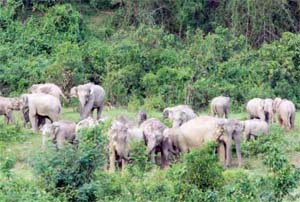 At least 226 people died and 62 elephants were killed in last 12years and a half in growing incidents of human-elephant conflicts, said forest officials.
They as well as wildlife conservationists blamed destruction of elephant habitats as the main cause for the incidents.
They said that elephants were being squeezed into smaller habitats due to destruction of forest cover.
Increasing use of elephant movement routes and corridors for farming and human settlements was also blamed.
In 2003, 10 people were killed in the conflict while in 2014 the toll of human life rose to 17.
At least 10 people were killed in the conflict in the first six months of the current year.
Most of the people were killed inside forests, said officials.
In one year since July 2014, 473 rice fields and 88 houses, mostly at foot hills or inside forests were damaged by elephants.
In 2003, five elephants were killed in attacks and 2014 seven elephants were killed.
At least three elephants were killed in the first six month of the current year, said forest officials.
They said barbed wire fencing of the border by India split and seriously affected elephant habitats. Killing for tusks and meat posed a serious threat to elephants.
Acute shortage of elephant feed also poses threat to survival of elephants.
Shifting slash and burn cultivation, better known as jum cultivation, also split or destroy elephant habitats, said conservationists.
Only 200 to 250 elephants are left in the forests of Bangladesh, according to forest officials and the International Union for Conservation of Nature.
Between 83 to 100 migratory elephants occasionally step into northern Sherpur forest of Bangladesh in herds from the northeastern Indian province of Meghalaya and damage crops, property and kill people finding no food and water in the small forest.
Forest conservator Tapan Kumar Dey said the Forest Department and IUCN found elephants in 11 reserved forests mostly in Chittagong Hill Tracts as well as in Chittagong, Cox’s Bazaar, Mymensingh and Sylhet.
Mohammad Abdul Motale, project manager of Status Survey and Development of IUCN’s Elephant Action Plan for Bangladesh said that the findings of an ongoing elephant census was expected to be published early next year.
IUCN said that the Asian elephant was a critically endangered species in Bangladesh as its population has declined.
‘Growing pressure on elephant habitats and movement corridors has led to crop raids and human casualties created a negative public sentiment towards elephant conservation in Bangladesh,’ said
Motaleb.
Elephants by nature follow specific corridors for their movement. But human settlement, setting up of army cantonments, construction of roads and India’s barbed wire fencing blocked half of the movement corridors, according to the forest department.
Motaleb said that construction of overpasses or underpass can protect elephant corridors.
He said that the planned rail track from Dulahazra to Gundum would pass through a number of elephant corridors in Cox’s Bazaar to create further problems for the endangered species.
AHM Raihan Sarker, associate professor of Institute of Forestry and Environmental Sciences of the Chittagong University, said that elephants were being forced to travel long distances for food due to destruction of forest cover and forcing them to go to rice fields situated either within the forest or next to forest areas causing human-elephant conflicts.
‘Due to lack of habitation and scarcity of food, more and more elephants are compelled to venture into human habitations situated near forests,’ he added.
In the protected forests, the allocated land areas were far from sufficient for elephants, he said.