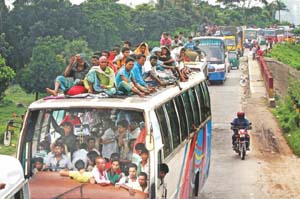 A 70-kilometre tailback on Dhaka-Tangail highway that lasted for about 17 hours took a serious toll on the Eid holidaymakers returning to the capital yesterday.
The congestion, from Chandra of Gazipur to Bangabandhu bridge in Tangail, began when a bus broke down on a bridge in Kaliakoir upazila around 2:00am, said Officer-in-Charge (OC) of Gorai Highway Police Station Jobaidul Alam.
Although the bus had been towed away within an hour, the oncoming traffic, including buses, trucks and pickup vans carrying passengers, created long tailbacks on both sides of the highway, added the OC.
Incessant rain and the Jamaat enforced two-day countrywide hartal from August 13 have also been blamed by many passengers for their suffering and the heavy rush.
Meanwhile, the passengers stuck on the highway, especially women and children, went through hell for lack of food, water and lavatory facilities, over and above the agonising wait.
Faruque Miah, an employee of a sweater factory who went to Dinajpur from the capital to spend Eid holidays with family, said: “I had to wait for several hours on the highway due to the jam.”
Nuruzzaman Hasan, a businessman of Tangail, said it took him eight hours to go just 50 kilometres from Chandra.
Victims of such suffering are not only the passengers. Driver of a Gaibandha-bound bus Abul Kalam Azad also spoke about his terrible wait for five hours in the tailback.
The traffic movement on the highway improved from around 7:00pm, said Sub-Inspector Kamruzzaman Raj of Elenga Highway Police Outpost.
According to highway police, vehicles from 26 districts, including 16 northern and four south-western districts, move on the two-lane highway. The traffic system here collapses during Eid seasons as numerous extra vehicles operate then.
They also blamed a section of drivers, who usually do not comply with traffic rules.
Besides, the busy highway remains shut for four hours every day due to the level crossing at Dherua in Mirzapur. It hinders traffic movement at least 22 times a day resulting in huge tailbacks during Eid holidays.
Meanwhile, buses were charging extra fare from Dhaka-bound passengers at Paturia ferry terminal yesterday, reports our Manikganj correspondent.
The usual fare of Tk 120 for going up to Gabtoli in the capital from Paturia is now Tk 400. Those who got off at Nabinagar, Savar were paying Tk 300 against the usual fare of Tk 60.
This put not-so-well off people like carpenter Prince, garment workers Laboni and Rahat, and auto-rickshaw driver Hafiz Sheikh in an embarrassing situation.
Many low-income people had to choose risky overloaded trucks and pickup vans over buses to get home.
At the ferry terminal, OC of Shibalaya Police Station Shahidur Rahman said the passengers were actually willing to pay extra as the number of passengers was far greater than that of the buses.
Magistrate of a mobile court Md Iqbal Hossain said the bus staff were taking advantage of the situation.