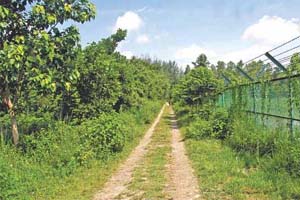 The Bangabandhu Jamuna Eco-Park in Sirajganj, which could become a lucrative spot pulling in local and foreign tourists, has been in a sorry state for years.
The park, about 125 kilometres north-west of Dhaka, has over 50 varieties of timber, fruit and medicinal trees and a zoo, but fails to draw many tourists due to a lack of necessary facilities and publicity, said visitors and officials concerned.
The 600-acre park on the western end of Jamuna bridge at Soydabad in the district was opened to public in 2008, but the authorities have not taken any initiatives to attract tourists.
During a recent visit, this correspondent found the park in a state of neglect, with only a handful of visitors.
The park has a small zoo with only four cages that accommodate only two sick porcupines and a few monkeys and hares.
Seven spotted deer were released into the park when it was opened, and their numbers redoubled in five years. But the animals have been suffering due to a severe shortage of drinking water, with no ponds dug in the forest, sources said.
Ibrahim Khalil, in-charge of the park’s wildlife and biodiversity, said there were two peacocks in the park, but they were shifted to Dhaka after they fell sick a few months ago.
“Visitors, especially children, love to see animals and birds. Therefore, more of these creatures could be brought to the zoo,” Khalil said, adding the government could earn huge revenues from the park if it was taken care of.
Businessman Masudur Rahman of Tangail, who went on a visit to the park with his family, said it had lush vegetation, with a lot of trees on the river Jamuna, but it did not have a guesthouse for visitors.
“If there were accommodation facilities with food, tourists could spend the night and enjoy the moonlight that reflects in the river,” he added.
Mahbubur Rahman and Labonyo Akhter, who went to the park along with their two children from Sirajganj town, appreciated the park’s location and natural features, but expressed unhappiness about the shabby condition of whatever facilities it had.
“The three toilets available for visitors are unusable,” Mahbubur said, adding that the park authorities had installed nothing for the entertainment of children.
Forester Mohammad Ripon Miah, acting in-charge of the park, said it was imperative to construct a research centre, a museum, a guesthouse, a watchtower and some cottages and to increase sitting facilities by the riverside in order to attract tourists.
“Arrangements for a vehicle are very important for tourists so that they can take rides to explore the entire park,” he added.
Harunur Rashid, divisional forest officer in Pabna, said they would build an office in the park this year while a rest house, a research centre and some cottages gradually.