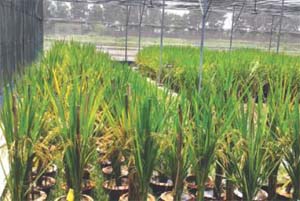 Regulators’ foot-dragging has failed scientists in field-testing Vitamin A-enriched rice, better known as “Golden Rice”.
A year passed by since the researchers sought approval for a “confined field trial” on Golden Rice but they are still to get a response.
As a result, the plant breeders at Bangladesh Rice Research Institute (BRRI), who have been trying to develop a Vitamin A-enriched rice variety suitable for Bangladesh’s agro-ecological climate, missed out one growing season (Boro) and now fear missing out the next season too.
Golden Rice, widely acclaimed for its perceived potential to fight Vitamin A deficiency (VAD) in expecting mothers and children, successfully went through greenhouse trial process at the BRRI early last year.
Then in September, the researchers sought approval from the biosafety regulators to do the field trial in a controlled-environment within the BRRI facilities before advancing into production phase but to no effect so far.
Starting the greenhouse trial around the same time as the BRRI, the Philippines’ national rice research institute – PhilRice – has advanced two steps ahead by already completing confined field trial and multi-location field trials, thanks to pro-active regulatory support in that country.
Golden Rice is a “transgenic” crop, and special approval from the biosafety authorities is a prerequisite for conducting field trials on such crops.
Something is described as transgenic when genes from a different species are transferred to a plant or animal by using genetic engineering technique to increase its vigour.
“We’ve conducted greenhouse trials long ago and are still waiting for approval for conducting confined field trial,” said Dr Helal Uddin Ahmed, who heads the plant breeding division of the state-run BRRI.
Helal said they found very good results from greenhouse trial as the yield potential of Golden Rice turned out to be as good as that of BrriDhan-29, the country’s most productive Boro rice variety.
BRRI plant breeding division’s Chief Scientific Officer Dr Alamgir Hossain told The Daily Star, “We applied for confined field trial of Golden Rice in September, 2012, hoping to go for the trial in Boro season (Nov-Dec last).” But they are now worried whether they would be able to do so even in the upcoming Boro season if the approval is not given in time.
Officials concerned said the BRRI application has gone through several scrutiny processes at the Ministry of Agriculture, and Bangladesh Agricultural Research Council (BARC) since September last and has been lying with the Ministry of Environment for several months now.
Reached over the phone, BARC Executive Chairman Dr Wais Kabir confirmed forwarding the council’s approving view to the agriculture ministry long ago, and said the ministry also paved the way for Golden Rice trial. “It’s now lying with the environment ministry,” he added.
But the National Committee on Biosafety (NCB), headed by the environment secretary, is yet to take up the issue. In Bangladesh, the environment ministry is responsible for implementing the Cartagena Protocol on Bio-safety and the NCB is the authority for ensuring safe management of modern biotechnological development.
Mohammed Solaiman Haider, who acts as the NCB member-secretary, however, told this correspondent that the environment ministry received the petition only three/four months ago.
“We’ll soon hold a meeting of the NCB and discuss the Golden Rice trial issue, among other, things,” said Solaiman, a deputy director of the Department of Environment.
Asked, Prof Dr M Imdadul Hoque, dean of biological sciences faculty at Dhaka University, and a member of the Bio-safety Core Committee (BCC), an auxiliary body of the NCB, said that a working paper is in the process of being placed at the next NCB meeting for approval of Golden Rice trial.
The transgenic technology in rice was first applied by Prof Ingo Potrykus, then at the Institute for Plant Sciences of the Swiss Federal Institute of Technology, and Prof Peter Beyer of the University of Freiburg, Germany. Their insertion of beta carotene-enriched gene from daffodil to rice drew world attention back in the late ’90s, and the rice became known as Golden Rice because of the grains’ golden colour.
After years of research and experiments, the IRRI found that transfer of beta carotene gene to rice from corn was more rewarding than that from daffodil.
On April 13, 2011, Seattle-based Bill and Melinda Gates Foundation sanctioned a grant of over $10 million to the IRRI to fund, develop and evaluate Golden Rice varieties for Bangladesh and the Philippines. The Foundation expects that Golden Rice variety of BRRI Dhan-29 will be ready for regulatory approval by 2015.
Bangladesh’s most productive rice variety — BRRI Dhan-29 — along with an IRRI variety, — IR-64– and a Filipino variety, RC-28, has gone through the process in which these were genetically engineered to contain more corn gene responsible for producing beta carotene, a source of vitamin A.
The IRRI says that globally about 6,70,000 children die every year and another 3,50,000 go blind because of vitamin A deficiency.
According to the World Health Organisation (WHO), global database on vitamin A deficiency, one in every five pre-school children in Bangladesh is vitamin A-deficient, and 23.7 percent of expecting mothers are affected by vitamin A deficiency.
Once released commercially, BRRI breeder Alamgir said, consumption of only 150 gram of Golden Rice a day would provide half of the recommended daily allowance (RDA) of Vitamin A for an adult. This is expected to revolutionise fighting vitamin A deficiency in the mostly rice-eating Asian countries where the poor have limited access to Vitamin A sources other than rice.