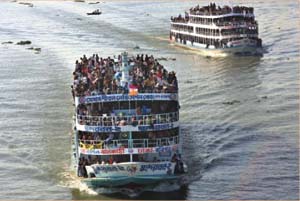 With the Eid-ul-Fitr only hours away, hundreds of people are heading homes withstanding the sufferings on the way.
The Muslims in the country will celebrate their biggest religious festival tomorrow if the moon is sighted today. In case the moon is not sighted today, the Eid will be observed tomorrow.
The three-day public holiday starts today.
Although the homebound rush started a few days ago, an unending stream of people crowded the Gabtoli, Sayedabad and Mohakhali bus terminals and Kamalapur Railway Station and Sadarghat Launch Terminal yesterday.
All that they want is to celebrate the Eid with their loved ones.
“It is quite impossible for me to celebrate the Eid without the rest of my family,” said Abdul Majid who was waiting at Gabtoli for a bus to Meherpur where his elderly parents live.
“Every year we face many difficulties to go home. Still, we take all these troubles as all the woes vanish when we can celebrate the Eid together,” he said.
Meanwhile, with thousands already left, the usually busy Dhaka streets looked different yesterday.
The city dwellers, however, faced traffic congestions at some points, especially in front of shopping malls and on the streets leading to the bus, launch and train stations.
Given the battered highway condition, bus terminals saw a decline in passengers this year. Many, who usually travel by bus every year, are taking launch or train this time to avoid danger on the way. This has put an extra pressure on the rail and waterways.
Taking advantage of the situation, transport workers at Sadarghat were charging extra fare.
As tickets of most of the cabins were sold out, hundreds boarded on decks, turning the vessels overloaded.
Arifur Rahman, a deputy director of Bangladesh Inland Water Transport Authority, said they saw the highest number people taking launches to go home this year.
“We did not witness such pressure in the last couple of years,” said Rahman.
Some 120 launches were expected to leave the capital yesterday. By 8:00pm, 80 of them left the Sadarghat terminal with an average 1,800 passengers on each.
Scenes at Kamalapur were no different. Many travelled on rooftops failing to get tickets. Some said they managed tickets from black market at a high price.
Visiting the station, Communications Minister Syed Abul Hossain pledged to run trains on schedule.
In the last few days, there have been numerous reports on trains being late by up to several hours.
Speaking to reporters at the station, Abul claimed almost all the trains left the station on time yesterday. He also blamed the media of “incorrect” reporting about the transport service ahead of Eid.
Fifty-six trains left the station yesterday. Of them, eight were late by half an hour and six by over an hour, the minister said.