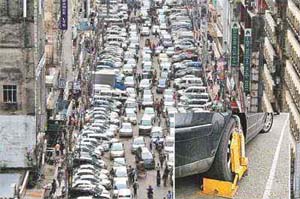 Dhaka Metropolitan Police has started using wheel clamps to lock illegally parked vehicles and ensure that they are towed away.
“We have procured 100 wheel clamps, which four divisions of traffic will use to tow away more illegally parked vehicles from a certain area,” said DMP traffic Chief
Mohammad Mahbubur Rahman.
The use of clamps has started on March 11.
He added that no additional charge would be imposed for the clamps.
Traffic sources said for illegal parking an official can fine only Tk 200 irrespective of vehicle type. However, towing charge differs with vehicle type. For cars,
trucks and buses it is Tk 1,200 and motorbikes and CNG-run auto rickshaws Tk 1,000.
Deputy Commissioner (DC) Khandaker Nazmul Hasan of traffic south division earlier this month said, “We have completed training of traffic personnel on how to use the
wheel clamps.”
Mahbubur Rahman, also joint commissioner (traffic), said they use tow trucks only to scare off those who have parked illegally since if one is towed in an area, the
rest move away. So, cars illegally parked have plenty of time to go away and avert penalty for breaking the law.
“A traffic police team equipped with wheel clamps will cordon off a certain spot, and will set wheel clamps to vehicles parked illegally,” he said, adding that a tow
truck will then complete the towing of all vehicles one by one.
Illegal parking goes on unabated as understaffed and ill-equipped traffic wing of Dhaka Metropolitan Police could not contain the menace, which clogs or narrows down
streets of the capital.
The four traffic divisions of DMP have only four government tow trucks and 19 private ones which on average could tow only 120 vehicles a day leaving several thousand
parking offenders scot-free.
Traffic Chief Mahbubur Rahman said, “There are only two impoundage for keeping towed vehicles in the capital and it takes hours for a tow truck to complete a tow and
return to the scene, giving scope for parking offenders to escape.”
DC Nazmul Hasan said only a traffic sergeant riding a motorbike keeps vigil on a certain stretch of street covering several intersections to prevent illegal parking.
Only 10 sergeants are deployed in the area under traffic south, which is the largest among the four traffic divisions in the capital, he said.
Several high officials of traffic wing, which have around 3,800 personnel, said almost all traffic policemen remain busy controlling traffic movements at intersections
and it is tough for the rest to contain illegal parking.
Anyone could see that illegally parked vehicles sometimes occupy two-thirds of a street leaving aside just one lane for moving vehicles, he said. This is seen usually
in front of markets, academic institutions, government or non government offices.
Even on Abdul Gani Road in front of Bangladesh Secretariat, where ministers and secretaries go to work, vehicles are kept parked in more than one row, nearly blocking
the busy thoroughfare.
A high official of traffic wing said to address the issue of parking on roads effectively, the government should increase the number of wheel clamps and tow trucks
being used and impose higher fines.