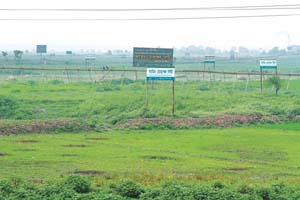 Land developers are illegally filling up vast areas of wetland and converting huge areas of seasonal cropland to launch housing projects along the Dhaka-Mawa Highway.
All the laws and policies formulated over the years to protect the environment have simply become a farce as the authorities concerned are turning a blind eye to the misdeed.
During several recent visits to Shikarpur beel, Kuichhamara beel, Abdullahpur, Alampur, Rajendrapur in Sirajdikhan, Srinagar and Lauhajong in Munshiganj, it was seen that influential land developers were filling up thousands of acres of land.
The land developers have also erected hundreds of colourful billboards in the water, bearing advertisements like “green model town” or “modern town” to lure prospective buyers. Even in September this year, locals caught fish and sailed boats around those billboards posted by different housing projects like “green city”, “silver city”, “Padma city”, “modern city”, “Asian town” or “shanti nibas”.
The roadside views are the same for a stretch of a few kilometres on both sides of the highway.
The vast areas of low land remain four to five months under water where locals catch fish during monsoon and cultivate rice and vegetables in winter.
That had been in practice for generations, said Khaleque Morol of Baro Shikarpur in Srinagar while talking to this correspondent.
Khaleque was allegedly forced to sell his land to Amin Mohammad Foundation.
“I was compelled to sell my 140 decimals of land as they were threatening to fill it up. If they filled up my land with sand, I could not grow anything there. Rather they would have asked me to pay for the sand, which they have done to others,” alleged Khaleque.
“They just make people hostage and force them to sell their land,” said Khaleque, who now has no land except his homestead and has become jobless.
Two men were seen fishing on a boat fastened to a big signboard of Amin Mohammad Foundation near Bara Shikarpur village. The billboard reads, “Modern city with all facilities, only five kilometres away from Babu Bazar bridge…”
The older of the men said, “Now rivers, wetland, cropland — everything is turning into housing projects. Here, the depth would not be less than five to six feet. Our beel too is turning into a housing scheme.”
Dr Ishrat Islam of Department of Urban and Regional Planning, Buet has recently showed that nearly 10,000 acres of wetland was filled up in Dhaka city and its fringes every year between 1999 and 2010. Before that, around 13,000 acres of wetland was filled up each year between 1989 and 1999.
The Bangladesh Environment Conservation Act, 1995 (Amended 2010) and other related laws prohibit converting any land into housing estates without prior permission. But in most cases the land was filled up without permission.
Not only the outskirts of Dhaka but all the last remaining cropland, wetland, forestland, ponds, rivers in any direction about 100 kilometres off the capital centre have been changing into housing schemes fast.
The laws have turned into a mockery as the government agencies themselves neither comply with nor enforce those.
The Rajdhani Unnayan Kartripakkha (Rajuk) itself fills up land for housing projects or approves private housing projects in the areas, which are supposed to be preserved as flood flow zone.
The present trend of losing agricultural land and other open spaces was very alarming, said Shamshul Huda, coordinator of Association for Land Reform and Development (ALRD). “The government should enforce the laws very strictly to stop this practice,” he said.
The ALRD has conducted a study which shows every year 72,077 acres of agro-land is being converted to non-agricultural land with 90 percent of it being used for housing.