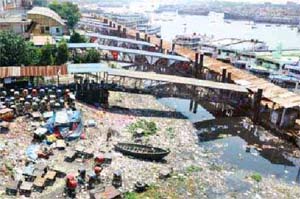 Waste continues to be dumped into the River Buriganga despite a June 2011 High Court order which prohibited the dumping of waste in the river or on its banks as well as ordering the sealing of sewerage outlets and industrial wastes lines within a year.
The High Court directed the chairman of Dhaka Water Supply and Sewerage Authority to take steps to seal off the waste outlets and asked the Dhaka City Corporation to immediately start cleaning the riverbanks to stop dumping any more waste into or by the river.
However, one year on, every day a huge amount of waste is dumped into the river along the riverbanks between Babu Bazar bridge and Shahid Nagar.
Petitioner’s counsel Manzill Murshed told New Age, ‘The authorities did not take any major steps to save the river in the last one year but it should be done for the welfare of all.’
Rotten fruits and domestic waste is seen floating in the river at Badamtali ghat where the wholesale fruit market is a big source of rubbish.
A fruit seller Rahman Miah based at Wise ghat told New Age, ‘For a week city corporation vehicles have not come here to collect the wastes.’
In many places, rickshaw garages, floating hotels and iron mongers dump wastes into the river.
Domestic waste is dumped at east Islambagh Chunara ghat, Alir ghat, Bou Bazaar, Balu ghat and many other places from where they get carried into the river through the canals or sewers.
Waste is also dumped near Nababganj sluice gate, Mina Bazaar canal, Vhanga Masjid, opposite Mitali Tannery at Hazaribagh, and Company ghat canal at Dholaipar.
‘A disaster is not far away if measures to improve the city’s sewerage management are not taken as millions of people depend on the Buriganga River for supply of water,’ said Bangladesh University of Engineering and Technology head of civil engineering Mujibur Rahman.
WASA’s sewerage covers only 30 per cent of the area of Dhaka city, while the remaining waste is dumped into rivers, canals and other water bodies, he said.
‘River cleaning initiatives will not bring any success, if direct dumping of waste into water bodies is not stopped, said Mujibur.
Save the Environment Movement chairman Abu Naser Khan said that the government should take strictest measures to stop dumping of wastes into the river.
He said, ‘The level of pollution is so alarming that the water of the river has lost its colour and quality posing serious health threat’.
About the High Court order, Dhaka South City Corporation additional chief waste management officer Abu Saleh Md Moinuddin said, ‘We asked the kitchen market authorities to dump their wastes in some designated spots from where the DCC cleaners would collect them.’
‘Though the city corporation is very careful in handling wastes, there are some cleaners who take their wastes to the riverbank to sort them out,’ he said.
The High Court, in the same order, directed the Dhaka Water Supply and Sewerage Authority to seal in one year all the sewers that discharge wastes and pipes that discharge industrial effluent into the river.
Dhaka WASA managing director Taqsem A Khan told New Age, ‘There is no sewage outlet of WASA that goes into the River Buriganga. There are only storm water drainage lines to pass the rain water’.
‘But many house owners link their sewage discharge connection directly to storm water drainage line instead of the sewerage network to evade service charge or due to unavailability of WASA sewerage connection,’ he said.
He said that WASA could disconnect the illegal sewage discharge connections but it would cause great inconveniences as it would result in the flooding of the roads of Dhaka city.
In Dhaka about 15,000 tonnes of waste is generated daily and one-third of it is treated by Pagla Waste Treatment Plant while the rest is dumped into rivers, canals and other water bodies, said a WASA official.