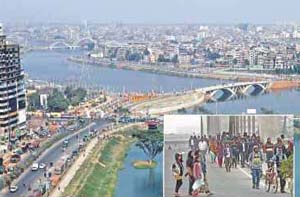 Hatirjheel seems to be a picture of Dhaka we could dream of. It is indeed a small piece of the capital that stood aloof from the rest. The sight of its jam-free express roads, uncluttered footpaths, modern bridges, walkways along a lake stretching as far as our eyes can see would compel us to forget the city we hear, see and experience every day.
The irony is that the place could have been well described as the dumping zone of Dhaka before the government took up the project. The lake used to be a ditch carrying household and industrial waste.
And now Hatirjheel covering 320 acres is transformed into a place of festivity at night but with serenity settling down.
Colourful lights illuminating the wide expanse of concrete structures, lake and waterfronts would take anyone to a world of fantasy. No wonder that within a few days since its inauguration on January 2 it has become a popular spot for city dwellers, who search for peace and beauty in their never-ending struggle in the concrete jungle of Dhaka.
“It is magnificent,” said Sumona Mazhar on her very first visit to Hatirjheel with her three children last weekend.
“There is a severe shortage of open space and recreational facilities for families in Dhaka and I am very glad that now we have a place to visit with our children.”
A group of people were seen strolling down, giggling and gushing. With much exuberance, they were taking photographs, posing in front of the lake, bridges and flowerbeds.
A family of seven, they said they had got the news of the inauguration of Hatirjheel on TV and came all the way from Narsingdi to see the place in their own eyes.
“It’s worth the five-hour-long trip to the city,” one member of the family said.
The new and yet pristine place attracts young lovers too. Bridges with the lake water beneath, lights reflecting off the water surface and rows of trees around the lake — all together give you a sense of romance.
On conditions of anonymity, a young couple agreed to talk to The Daily Star. They said they went there to escape the prying eyes of their friends and families. Unfortunately, however, they spent much of the time on the lookout for TV cameras and photographers to avoid unwanted public exposure, they noted wearily.
Young men were seen idling their time away at the benches by the lake while some were engaged in lively addas.
Some garment workers were roaming around the new walkways. They were trying to figure out the shortest route from their quarters to their factories, said Amena Begum, who came to Hatirjheel with her roommates.
“It’ll be a pleasant everyday walk if we can go through this place to our workplace. Moreover, it will save us some time,” she said.
Many visitors opted for car or motorcycle rides through the maze of interconnecting roads and bridges in order to grasp the true magnitude of the project. Traversing distances that once took hours now became a few minutes’ journey.
Many said they were amazed by the well-planned project.
“Is this a time machine? How else is it possible to travel from Gulshan to Rampura in less than five minutes?” a university student said.
Everyone congratulated the government for taking such an initiative but with fear that like other public places in the city it would eventually become dirty and polluted for a lack of maintenance. There were paper bags and garbage already in some parts of the lake, said a visitor, while another pointed to some men who stood in a line urinating into the clean water of the lake as if it was their birthright.
“With citizens like these, who have no civic sense, for how long can you keep on blaming the authorities?” she said with rage and disgust. It is a fair question to ask, especially when people were actually caught on TV, destroying flower beds not even a week after the opening of Hatirjheel.
The construction of a theatre, park, garden and some other beautification projects has not yet been finished. Once the project is fully functional, asserted the authorities, the facilities would include an information centre, celebration point, viewing decks, benches at different points, game equipment for children, water taxi terminals and footbridges.
Till then, visitors seem content enjoying what the prime minister said a New Year’s gift to Dhaka dwellers.