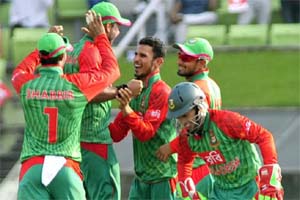 It was not a full house at the Sher-e-Bangla National Stadium yesterday. But the half-packed audience at Bangladesh’s home of cricket in Mirpur witnessed a turnaround that only suits
a team affectionately called Tigers.
With their back against the wall after three demoralising defeats including the first one-dayer that put their Champions Trophy berth in the balance, the Tigers needed something to answer back at their critics in the second one-day international. And they did it with some style, hammering South Africa for seven-wicket defeat.The victory levelled the three-match ODI series at 1-1, and more importantly guaranteed Bangladesh’s place in the eight-team Champions Trophy to be held in England in 2017, going into the decider at Chittagong on July 15.
Set to score a modest 163 to win following a magnificent bowling and fielding performance, the Tigers, after an early hiccup, raced to victory in 27.4 overs with opener Soumya Sarkar hitting a majestic unbeaten 88 off 79 balls. The southpaw, who hit the winning runs with a massive six over mid-wicket, also struck 13 sweetly-timed boundaries.
Bangladesh’s World Cup hero Mahmudullah Riyad might have scored a duck upon his return from a finger injury in the first game, but the right-hander more than amended with a composed 50 in hostile conditions.
It was a match in which the Tigers needed to solve a puzzle of what type of wicket they required to fire in every department. And in the end it was proved that they needed a sporting wicket not only to excel but also to end a long wait of defeating the mighty Proteas.
It was Bangladesh’s second win against South Africa after their famous 67-run victory in the 2007 World Cup in Guyana. But this win has a special meaning as in this match they not only bowled their opponents to their lowest score against them, but also dominated their opposition right from the word go.
It was a match where South Africa captain Hashim Amla hardly found anything other than winning the toss going their way.
If anybody wants to know how well the Tigers bowled yesterday, it’s better to find the biggest partnership in the visitors’ innings, which was a mere 29, for the second wicket.
There was a debate on whether Bangladesh would be able to handle South Africa’s pace attack on a responsive wicket, and it was quickly buried by the youthful pacer and wily spinners. The Tigers have over the years showed that they love to play their shots and it was quite evident in the World Cup down under.
But what the bowlers did yesterday can only be compared with military drill at the famous Tiananmen Square in China. The moment young pace bowler Mustafizur Rahman, a magnificent find for the Tigers, had Quinton de Kock with a perfect short ball, the hosts with their tail up, irrevocably pressed the panic button for a team dubbed as a choker. It may be an overstatement but the fact is that on a wicket, which was a paradise for a stroke-maker, they went into a shell from where they never came out once Amla was clean bowled by Rubel Hossain. And then there was a moment when a comedy of errors saw their confused fielders dropping a sitter at mid-on.
Mustafizur finished with three wickets and gave ample evidence that he is increasingly becoming an asset for Bangladesh. But there was one special effort from a busy cricketer. Almost thrown into oblivion after a series of bad performances, Nasir Hossain’s return to form, and that too with the ball, was a special treat for the home fans. He has not only claimed three wickets, but made his strong presence felt in an overall eye-pleasing display of fielding by the Tigers.
And yesterday their fielding effort was even better than that of South Africa, who are regarded as a benchmark in this art for a long time.
If a captain can inspire others, then Mashrafe Bin Mortaza showed how inspirational one can be. He did not bowl that many overs, but the way he rotated his bowlers with aplomb and set his field was something to behold. He may limp on his bad legs, but his commitment and aggression is the driving force behind the Tigers, who have now made it a habit of felling one frontier after another under his stewardship.
There might be a tinge of disappointment the way Tamim Iqbal threw his wicket away. But he can be excused on a day the Tigers have hardly put a foot wrong in a never-seen-before turnaround.