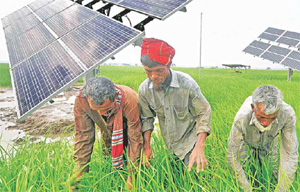 Bangladesh has become the first country to get funds from the United Nations for its fast growing solar home systems, which are not only lighting up houses in off-grid villages but also showing the world the way to a low-carbon future.
The United Nations Framework Convention on Climate Change (UNFCCC) issued 395,286 carbon credits worth €3.56 million to two Bangladeshi organisations — Infrastructure Development Company Ltd (IDCOL) and Grameen Shakti — last week.
“Yes, we are getting the fund under the Clean Development Mechanism (CDM) for our solar home system programme,” Nazmul Haque, director (investment) and head of advisory of the IDCOL, told The Daily Star yesterday.
The UNFCCC has issued 212,482 carbon credits to the IDCOL and 182,804 credits to Grameen Shakti.
The IDCOL is a state-owned development financial institution dedicated to promoting and financing infrastructure and renewable energy projects in the country, while Grameen Shakti, set up by Nobel Laureate Prof Muhammad Yunus, aims to take clean solar power systems and communication technology to villages.
Dr Shahidul Islam, who worked at Grameen Shakti from 2005 to January this year, said Bangladesh got the fund as the first country in the world for its stellar success in installing solar home systems. Some other countries such as Senegal and India are in line to get the fund.
Though Bangladesh is one of the lowest emitters of carbon globally, it has set an example by embracing the clean energy generated from small solar home systems.
Supported by the Global Environment Facility and the World Bank, the programme started in 2003 with a target of financing 50,000 systems by 2008.
The target was achieved in August 2005, almost three years ahead of schedule.
The IDCOL then revised up its target to install 2.5 million systems by 2014 and succeeded in achieving it. It has already installed four million systems across the country, covering 10 percent of the total population.
Bangladesh has one of the fastest growing solar home system projects in the world, with rural households using renewable energy for lighting, running fans and TVs and charging mobile phones.
Apart from the World Bank, Asian Development Bank, German development bank KfW, German technical cooperation agency GTZ, Islamic Development Bank and Netherlands Development Organisation SNV supported the IDCOL-led efforts.
Solar home systems are helping Bangladesh cut carbon emissions by reducing use of kerosene in rural areas.
Citing a research by the IDCOL, Nazmul said a family needs eight litres of kerosene a month for lighting up a house in a rural area.
“As we have already installed four million solar home systems, this programme is saving around 32 million litres of kerosene every month,” he said.
The IDCOL programme saves 2.7 lakh tonnes of kerosene annually, cutting about 4.88 lakh tonnes of carbon emission in the process every year.
In 2007, the IDCOL signed an agreement with the World Bank on the global lender’s purchase of carbon credits from the company. Its programme was registered under the UNFCCC in 2012.
As per the agreement, the WB would buy each certified emission reduction unit for €9, said Nazmul.
The CDM, a mechanism under the Kyoto Protocol, allows companies in industrialised countries to buy carbon credits from developing nations to comply with the requirements for reducing emissions.
The installation of solar home systems has made a difference in the lives of many in rural areas of the country.
Abul Hossain, a farmer in Jhinagati village of Barguna, used to buy around seven litres of kerosene every month to light three kerosene lamps in his house, as there is no electricity in his village.
But it changed after he got installed a solar panel on the roof of his house.
Like many of his neighbours, Abul now lights up his house with solar energy.
Momena Begum, a solar home system user at Musapur village on Sandwiep island, said she had been using solar energy for the last one year.
“We do not have electricity here. We are happy that we have got the opportunity to use this solar home system,” she said.
Talking to The Daily Star, Nurjahan Begum, managing director of Grameen Shakti, said life span of a solar home system is about 25 years, and a household usually pays off the total cost of the system within 3 years of its installation.
Grameen Shakti has installed over 1.6 million solar home systems. Besides, 47 other organisations are installing more than 65,000 such systems a month.
In 2008, the government formulated a policy to promote renewable energy sources, especially solar power.
It now generates 2.5 percent of the country’s electricity production from renewable sources, and has a target of increasing it to 5 percent by this year and 10 percent by 2020.
At present, the country’s installed power generation capacity is 10,341 megawatt with an average actual peak generation of 7,500MW.
Still, around 40 percent of the population does not have access to electricity, and most of them use kerosene lamps.