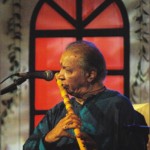 According to mythology, ‘bansuri’ (South Asian transverse alto flute) is intimately linked to the love story of Krishna and Radha. Legends narrate how the tunes of bansuri would drive the women of Braj into a frenzy.
For eons bansuri has been very popular in folk music. Its introduction in Indian classical music has been rather recent, however, and the late Pandit Pannalal Ghosh has been widely recognised for this achievement.
Pandit Hariprasad Chaurasia further enhanced the bansuri playing style with his innovative techniques and gave the instrument a higher status.
The Indian master musician performed live at Dhaka Club on October 23. In association with the event management group Web Entertainment Ltd, Dhaka Club organised the programme.
The President of Dhaka Club Ltd, Sadat Hossain Salim, said, “Dhaka Club strongly believes in providing patronage to classical music. Renowned artistes of the sub-continent like Mehdi Hassan, Hemanta Mukhopadhyay, Ustad Ghulam Ali and Ustad Amjad Ali Khan have performed here. Continuing with that tradition, Dhaka Club invited Pandit Chaurasia to grace us with his music.”
Pandit Hariprasad Chaurasia was born in Allahabad, India, in 1938. Chaurasia surprisingly does not come from a long lineage of flutists. His father was a famous wrestler who had aspirations of his son following in his footsteps. Chaurasia has said that he takes advantage of his wrestling training as it gives him immense stamina and lung power that are the hallmarks of his flute playing.
When he was just 19, he got a job playing for All India Radio, Cuttack, Orissa, and within five years he was transferred to their headquarters in Bombay (now Mumbai). There he got the additional exposure of performing in one of India’s cultural centres and also studied with Annapurna Devi, daughter of Ustad Allauddin Khan.
There he established the creative peak of his career, developing a style that was respectful of tradition, yet demonstrated innovation. In 1992, he was awarded the Padma Bhushan and in 2000, the Padma Vibhushan. Chaurasia has also composed music for a number of Indian films and has performed throughout the world along with renowned musicians, including Yehudi Menuhin and Jean Pierre Rampal. Currently he heads the World Music Department at the Rotterdam Music Conservatory.
As the Pandit began around 9:30 pm, the hustle and bustle of the busy Shahbagh intersection — in particular, the honking buses — was clearly a nuisance. Chaurasia’s bansuri was potent enough to take flute enthusiasts to another realm. However, the relentless ringing of cell phones and people in the audience chatting during the performance were absolutely regrettable. It’s an affront to an artiste of Chaurasia’s stature as well as those who went there to enjoy a superlative act.
Starting with Raaga Bageshri (usually played late at night, articulating the emotion of a woman waiting to be reunited with her beloved), the Pandit continued with dhrupad, Raaga Misra and more. Duration of each composition was approximately 15 minutes. A reputed classical musician is capable of playing one raaga throughout the whole night, but as it can be assumed, the Pandit chose to give the audience samples of the compositions.
The highlight of the performance was the versatility of bansuri. It easily produces all basic elements of Hindustani music, such as ‘meend’ (glide) and ‘gamak’ (variation of pitch). Bansuri is a simple instrument. Unlike string instruments, it does not need constant tuning.
However, as Pandit Chaurasia puts it, “it is Krishna’s instrument and the Lord has made it deceptively simple.”

August 15, 2022 by Admin
Cultural Desk : dhakamirror.com A nonprofit organization named Pittachhara Forest and Biodiversity Conservation Initiative works to protect Bangladesh’s biological diversity and raise community awareness of how to coexist peacefully with nature in some of the country’s most isolated and rural areas. A three-day art camp with a focus on saving the environment has been organized ... Read more

August 14, 2022 by Admin
Cultural Desk : dhakamirror.com People from different walks of life in Manikganj remembered renowned filmmaker Tareque Masud and journalist Mishuk Munier with respect and love on their 11 death anniversary yesterday (August 13, 2022). Wreaths were placed this morning at the memorial built in their memory at Joka area of Ghior upazila of Manikganj on ... Read more

Flowers and nature are depicted in watercolor at Kaya

August 2, 2022 by Admin
Entertainment Desk : dhakamirror.com In an exhibition titled Watercolor currently taking place at the Galleri Kaya in Uttara in the capital, Bangladeshi artist Sarker Helal Uddin, who lives and works in Canada, has shown a variety of flowers, scenic beauty, urban life, nature, and other subjects. The show is Sarker Helal Uddin’s fifth solo watercolor ... Read more

May 25, 2022 by Admin
Today is the 123rd birth anniversary of the national poet, Kazi Nazrul Islam. The birth anniversary of Nazrul, widely known as the rebel poet, is observed in Bangladesh on Jaishtha 11 according to the Bangladeshi Bangla calendar. A poet, lyricist, composer, playwright, novelist, revolutionary and journalist, Nazrul sang equally for freedom and love. In his ... Read more

May 22, 2022 by Admin
Samuel Beckett’s Happy Days was staged at the Experimental Theatre Hall of Bangladesh Shilpakala Academy on Saturday. Translated by Kabir Chowdhury and adapted and directed by Shuvashis Sinha, the play is a take on the absurdity of life, an investigation into meaning and meaninglessness of human existence. Although the original play contains two

May 12, 2022 by Admin
Star Cineplex is set to open their branch at Bangabandhu Military Museum today. There will be one screen at this outlet, with state-of-the-art sound system and 183 seats, according to a press release. The popular cinema hall franchise’s Chattogram branch will be launched at the Bali Arcade this summer, while the Bogura branch will be ... Read more

Baishakh gets its colours back after two years

April 16, 2022 by Admin
After a gap of two years due to the pandemic, the country’s people celebrated Pahela Baishakh, the first day of the Bangla new year, with due fervour on Thursday. Sanctity of the holy month of Ramadan and security arrangements were maintained in the celebrations as well. Celebrations to welcome the new

April 13, 2022 by Admin
On the occasion of Bengali New Year, a 10-day long Boisakhi Mela will start from tomorrow at the premises of Bangla Academy. The fair is organised by Bangladesh Small and Cottage Industries Corporation (BSCIC), and Bangla Academy. Industrial minister Nurul Majid Mahmud Humayun will inaugurate the fair, tomorrow at 11 am. Director General of Bangla Academy ... Read more

April 8, 2022 by Admin
Fujiko A. Fujio, co-creator of iconic manga series Doraemon, has died at age 88. IGN reported that the manga artist died in his home in Tokyo on Thursday, April 7. According to the report, police were called to the artist’s home that morning after he had collapsed, but he had died by the time they arrived. ... Read more

April 3, 2022 by Admin
Chhayanaut will celebrate Pahela Baishakh organising cultural programmes at Ramna Batamul in the capital on April 14 after a two-year hiatus. The cultural organisation celebrated Pahela Baishakh in 2020 and 2021 organising online programmes due to the Covid situation. This year, the celebration programme will begin at 6:15 am. The announcement was made at a ... Read more

March 28, 2022 by Admin
The Fagua festival has a special place in the life of tea workers. Besides an attempt to preserve their heritage, the festival brings rhythm to their arduous and monotonous lives. Yesterday, tea workers from different areas, belonging to different ethnic groups with their own language and culture, came together as one to mark the Fagua ... Read more

March 27, 2022 by Admin
An art camp was held marking Independence Day at the National Memorial in Savar yesterday. Shilpakala Academy organised the event in collaboration with Dhaka district administration and Dhaka district police. Around 20 students from various universities took part in the camp. Mahbubur Rahman, guide lecturer at

March 26, 2022 by Admin
Celebrating the golden jubilee of Bangladesh’s independence and their journey of 50 years, noted drama troupe Theatre has launched a year-long initiative. Marking Independence Day, they will be staging well-known plays. The 204th show of the anti-communal drama, “Meraj Fakirer Ma” (1995), written and directed by Abdullah al-Mamun, was staged yesterday at Bangladesh Mahila Samity

March 9, 2022 by Admin
Four books written by the legendary folk singer Fakir Alamgir has been published on the occasion of this year’s Ekushey Book Fair. Last year, on July 23, the Ekushey Padak winner left us for good. Three of the books have been published by Anannya Publishers, and the other from Rhythm Publishers. The books are: “Desh ... Read more

February 27, 2022 by Admin
Artistes are displaying prints to pay tribute to Bangla language and Language Movement martyrs in an exhibition ongoing at Safiuddin Shilpalay in Dhanmondi. The ten-day group art exhibition is displaying 38 artworks by 30 eminent and young artists. The artworks were selected out of a pool of more than 60 artworks that were submitted to ... Read more

February 22, 2022 by Admin
The 20th edition of ‘Amar Bhashar Chalachchitra 1428’, organised by Dhaka University Film Society (DUFS), starts today. The will take place at the TSC premises of Dhaka University and will end on February 26. The largest festival of Bangla language films will commence on Tuesday, February 22, 2022, with the screening of Satyajit Ray’s “Agantuk”. ... Read more

February 20, 2022 by Admin
Ekushey Padak-winning poet and former lawmaker Quazi Rosy dies in a hospital in Bangladesh capital Dhaka on early Sunday. She was 73. She breathed her last at about 2:30am, said her daughter Sumi Sikandar. Prime minister Sheikh Hasina expressed profound shock and sorrow at the death of the noted poet. Quazi Rosy was admitted to ... Read more