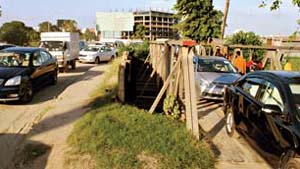 Users of the city’s Gulshan-Tejgaon link road have been suffering seriously for more than one year due to delay in construction of a bridge on the road. The scheduled time of completion of the bridge was July 8, 2010 but the authorities again changed the schedule and fixed it on June 2011, reports The New Nation.
Contractor Abul and Brothers started the construction work of the bridge in July last year but the work got slowed down till February due to revision of the architectural design of the bridge.
Sharifuddin, DCC executive engineer of Gulshan Zone told this reporter that the delay of the construction of this bridge was due to make it from 25-metre long to 40 metre and to integrate it with the ring road of Hatirjheel development project.
Following change of the bridge design, the cost of the Tk 6.38-crore project has increased further to Tk 1.80 crore. The Hatirjheel project authorities have agreed to provide Tk 1.30 crore, Sharifuddin said.
But later it was found that the construction of the bridge would not be possible without relocating the utility services like gas, water and telecommunications. Initially, the Dhaka City Corporation (DCC) started the construction of the bridge without relocating the utility services.
Md. Mustafizur rahman, an engineer of the bridge project said, “We had to revise the design for the piling work keeping the utility services in place as per DCC instructions and also to integrate the bridge with the Hatirjheel project.”
He hoped that the whole process would be completed within the tentative period and the bridge would be open to traffic by middle of the next year.There are utility service networks of Titas Gas, Bangladesh Telecommunications Company Limited (BTCL) and Dhaka WASA at the project site.
Abdul Wased, executive engineer of Water and Sewerage Authority (WASA), said that they have already shifted WASA supply lines from the construction site.
“We have been suffering for more than one year for delayed construction of the Bridge which was supposed to be completed within this month,” said Mukul Hossain Hasan, a resident of Gulshan area.
Khandoker Imamul Hasan. a resident of Tejgaon area told this reporter that the rough diversion creates traffic jam during the peak hours between Tejgaon and Gulshan