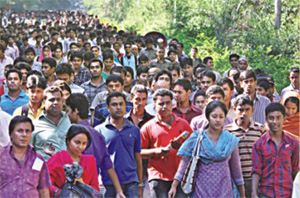 Admission tests, which otherwise correlate with hours of continuous stress, couldn’t be more relaxing if not for the campus that has a perfect touch of God-gifted scenic beauty, so say admission seekers about Chittagong University (CU) campus.
Thousands of aspirants from all over the country came here to sit for admission tests for the 2011-12 academic sessions that started on November 26 and will continue till December 1.
The university campus, covered in dense forest hugging serpentine hillocks, enthralled the aspirants, urging them to study here.
“I am already charmed by the natural beauty of the CU campus,” said Nishat Khanam, an admission aspirant coming from Brahmanbaria.
Stretching over 1,753 acres of land in the suburban area of Hathazari Upazila, some 22 kilometres off the port city, the campus currently houses around 20,000 students.
It’s picturesque quality is characterised by a stream, which made the university a famous tourist spot, hanging bridge, botanical garden, Mukta Mancha, Shaheed Minar, Swadhinotar Swarok Bhascarjo, central library and a host of students and visitors.
A combination of diverse flora and fauna completes the picture, making this campus popular at home and abroad.
CU is also the only university in the country that has a shuttle train service for its students. Alongside this, a mini-bus service (Tari) between the city and the campus is also available.
Mamun Uddin, another admission aspirant from Rangpur, said “I have made many trips by train before, but the journey by the CU shuttle train thrilled me much.”
“During the hour-long journey from the city to the campus, I found the students rejoicing all the way, singing songs and telling jokes,” he added.
Another aspirant, Mohammad Emon, who came from Kushtia, roamed around the campus after finishing his admission test.
As Emon put it, “The green undulating campus charmed me so much that now it’s a dream for me to study here.”
It is to be noted that a total of 1, 23,404 students have applied to sit for the admission tests this year against a backdrop of 3,826 seats available under the university’s eight units.