Key index of Dhaka bourse plunges 180 points
No efforts from the regulator and the private sector proved effective to pro up the stumbling stockmarket, which yesterday slipped again by more than 3 percent.
Owners of commercial banks, under their platform Bangladesh Association of Banks (BAB), decided on Sunday to launch a Tk 5,000 crore fund to give a financial support to the stockmarket facing a liquidity crisis.
But the move also failed to leave any long-term impact on the market.
The key index of the Dhaka Stock Exchange, DGEN, came down to 5,473 points after plummeting 180 points.
The BAB will sit with the Securities and Exchange Commission today to discuss the Tk 5,000-crore fund.
Last week, Association of Banks, Bangladesh (ABB), a platform of the chief executives of the banks, also decided in principle to make new investment in the market, within permissible limits. 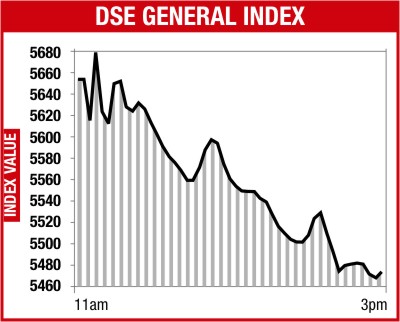 Before that, a series of regulatory measures to bring back normalcy to the market was surpassed by the chronic liquidity crunch in the bourses.
The regulatory measures included the reinstatement of 10 percent tax rebate facility for stock investment, withdrawal of a 10 percent tax on mutual funds income, reduction of tax at source on brokerage commission by half and formation of an advisory council.
All the initiatives left little impact on the market that witnessed only some occasional gains, analysts said.
While the bankers had promised to inject fresh money to the market, the bank owners decided to launch a market stabilisation fund, which is contradicting, they said.
If the banks can sponsor a fund then why they are not injecting the money into the market through their own portfolios, they questioned.
“The news of the formation of the mutual fund by the bankers prompted the market to fall further,” said Prof Mahmood Osman Imam, who teaches finance at Dhaka University.
“The banks should go for buying shares in their portfolios to boost the investors’ confidence,” said Osman, also a member of the index development committee of the DSE.
LankaBangla Securities, a stockbroker, in its regular market analysis said euphoria of investors started evaporating from Sunday afternoon while bankers retreated from their earlier promise.
“The investors booked profit and some went for panic sales speculating no tangible impact of the stabilisation fund,” it said.
The investors took pessimistic view after the declaration, sensing no immediate solution, the stockbroker added.
Earlier, a same nature Tk 5,000 crore Bangladesh Fund was launched to inject liquidity into the market, but the fund tangibly failed to bring liquidity and confidence.
Activities declined on the DSE yesterday with turnover, volume and trade going down by 32 percent, 31.21 percent and 2 percent respectively.
A total of 1.15 lakh trades were executed, generating a turnover of Tk 419 crore. Only 13 shares gained, while 242 declined and one remained unchanged.

August 8, 2022 by Admin
Business Desk : dhakamirror.com In a recent program, the Hongkong and Shanghai Banking Corporation (HSBC) in Bangladesh facilitated social loan financing for brac. In accordance with the agreement, HSBC will provide money to BRAC in the amount of Tk 6.12 billion to carry out social development projects, said a press release. This is the country’s ... Read more

August 8, 2022 by Admin
Business Desk : dhakamirror.com In accordance with its distributor finance program, Standard Chartered Bangladesh has completed the country’s first automated over-the-weekend loan disbursement, according to a press release. The first client to receive the funds from a distributor financing loan on a weekend was Nestle Bangladesh, This enhancement will empower distributors, which are usually small ... Read more

August 8, 2022 by Admin
Business Desk : dhakamirror.com Meghna Aviation Ltd. in Bangladesh has inked a contract to buy two Bell helicopters—a Bell 505 and a Bell 407GXi—according to a statement from Bell Textron. Meghna Aviation was founded in 2011 which is a member of the Meghna Group of Industries, a significant conglomerate with headquarters in Bangladesh that employs ... Read more

August 4, 2022 by Admin
Business Desk : dhakamirror.com Hongkong and Shanghai Banking Corporation (HSBC) will introduce the “Female Entrepreneur Fund (FEF)” in Bangladesh today as part of its global commitment for assisting female entrepreneurs. According to a news release, the program’s goal is to enhance financial literacy, networking, and funding for women entrepreneurs in Bangladesh through the FEF project. ... Read more

August 2, 2022 by Admin
Tanmi Haque has been appointed Country Head of Retail Banking, HSBC Bangladesh, effective from Monday. Tanmi succeeds Ahmed Saiful Islam who is moving to a new regional role in Hongkong within the bank according to a press release. Before joining HSBC, Tanmi was Head of Priority and Wealth, Standard Chartered Bank and has also worked ... Read more

August 2, 2022 by Admin
Business Desk : dhakamirror.com The manufacturer of women’s underwear Nova Intima signed a contract yesterday with the Bangladesh Export Processing Zones Authority (Bepza) to invest $28 million in the Mirsharai Bepza economic zone of Chattogram. With this investment, 60 million units of underwear and related materials and accessories will be produced yearly, resulting in 5,625 ... Read more

July 26, 2022 by Admin
According to business executives, RAK Ceramics (Bangladesh) would invest Tk 95 crore to build a bathroom fittings plant with the ability to create 1,500 faucets, shower heads, and all other relevant accessories in an effort to offer less expensive alternatives to imports. On Thursday, the listed international ceramics company announced its choice in a filing ... Read more

July 26, 2022 by Admin
Mohammad Hedayet Ullah was recently promoted by Syngenta Bangladesh to the position of country general manager. Hedayet Ullah will simultaneously assume the role of a member of the Syngenta Asia Group Leadership Team, according to a press release, Hedayet replaces AMM Golam Towhid, who has been appointed as regional commercial operations lead for new farming ... Read more

July 13, 2022 by Admin
Brac Bank has enhanced the fund transfer limits on its Astha mobile app and Astha web interface to provide customers with a better digital banking experience.Account to account transfer limits in Astha has been increased to Tk 10 lakh daily. These new limits are applied to all four types of transfers – other bank transfers ... Read more

July 9, 2022 by Admin
Business Desk : dhakamirror.comThe CEO of Tesla and richest man in the world, Elon Musk, said that he was canceling his $44 billion agreement to purchase Twitter. According to Musk, the social media business violated numerous terms of the merger agreement, and as a result, the deal is being terminated. On the other hand. Twitter ... Read more

286 ISPs will be unplugged

July 1, 2022 by Admin
Business Desk : dhakamirror.com According to Grameenphone the latest ban on SIM sales from the telecom watchdog was unexpected. The operator will decide how to proceed after reviewing the regulator’s letter relating to the suspension. The leading telecom operator was directed not to sell new SIM cards by the Bangladesh Telecommunication Regulatory Commission (BTRC) on ... Read more

BASIS to promote local IT in Europe

June 30, 2022 by Admin
The Bangladesh Association of Software and Information Services (BASIS) is set to promote local IT products and services in the European market. A delegation of the top ICT trade body in collaboration with the Export Promotion Bureau (EPB) will visit four European countries – Austria, Hungary, Slovakia and the

LG teams up with Rangs Industries

June 27, 2022 by Admin
Mobile financial service provider bKash has set up free health camps at 10 areas in the flood-hit Sylhet, Sunamganj and Habiganj districts in order to help the people affected by the flood. The areas include Sylhet Sadar, Bishwanath, and Gowainghat of Sylhet district, Sunamganj Sadar, Derai and Chhatak upazila in Sunamganj district, and Baniachong and

June 27, 2022 by Admin
As part of its financial inclusion drive, Bank Asia Ltd has disbursed agriculture loans among 220 marginal women farmers with a view to making them financially solvent. The private commercial bank lent Tk 1.8 crore at a 4 per cent interest rate to the farmers at an event at the Rajshahi Shilpakala Academy on June ... Read more

June 26, 2022 by Admin
Mastercard has concluded its recent Spend and Win campaign, titled ‘Mystical Maldives’ with an award ceremony. The campaign aimed to bolster domestic and international retail transactions by providing cardholders the opportunities to win attractive prizes on spends using their Mastercard credit, debit, or prepaid