From The New Nation 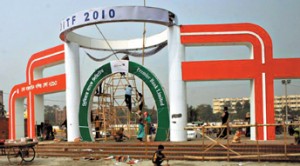 All is set to construct a permanent complex for holding international trade and other fairs in capital Dhaka as an agreement has already been signed with China to build the much awaited infrastructure at a cost of Taka 265 crore.
Commerce Minister Col (retd) Faruq Khan on Monday said the permanent venue for international trade fair would be built near the National Parade Square, opposite to Bangabandhu International Conference Center, to hold all big events without any hassle.
“China has agreed to provide Taka 210 crore while Export Promotion Bureau and the government together will bear rest of the cost amounting Taka 55 crore,” Faruq Khan said at a press conference ahead of the inauguration of 15th Dhaka International Trade Fair (DITF) 2010 at Sher-e-Banglanagar here.
Prime Minister Sheikh Hasina is scheduled to open the month- long fair on the first day of the New Year 2010, organizers said today, adding the fair would remain open for public from 10am to 10pm everyday. The entry fee has been fixed at Taka 15.
Acting Commerce Secretary Mustafa Muhiuddin and chief executive officer of EPB Mohammad Shahab Ullah were present.
EPB sources said the mega structure would be built on 6.72 hectares and the construction would be completed within three years of launching the project sometime in 2010.
Faruq Khan said the government now has to spent a sizable amount each year to develop makeshift infrastructures and other facilities to hold DITF, biggest of its kind in the country, which aims to make consumers at home and abroad familiar with Bangladeshi products.
The fair fetched Taka nearly 20 crore in 2009, but the organizers and the government this year expect a higher export order of Bangladesh products at DITF from international buyers as the global economic slowdown shows signs of recovery.
“The trade fair faced declining export order for the last three years, mainly due to economic crisis globally. But things are expected to reverse at the beginning of 2010,” said the commerce minister, urging organisers to ensure better service for consumers and visitors this year than anytime before.
“We will not tolerate poor service or any kind of forgery during the fair,” Khan warned, after journalists raised a number of complaints against organizers of the previous DITFs.
The complaints include: serving poor quality food at high prices from restaurants during fair and subsequent food poisoning, selling poor quality products at brand shops and massive dust pollution.
The minister held a series of meetings with the organizers, law enforcing agencies and saw for himself the finishing touch of different stalls in the fair, where 486 pavilions and stalls, including 28 from abroad, will showcase their products to fetch a handsome amount.
The government is expected to earn Taka nearly 5 crore from the fair ending on January 31.
Image Courtesy: Banglar Chokh

August 18, 2022 by Admin
News Desk : dhakamirror.com This year’s Battle of Minds (BOM) competition was won by Team Drogo from the Institute of Business Administration (IBA) under the University of Dhaka.Battle of Minds considered as the most highly anticipated talent competitions of the country.According to the press release, the winners, Team Drogo (Syed Shadab Tajwar, Tasmim Sultana Nawmi ... Read more