A report of fisheries ministry and WB finds
Bangladesh’s agriculture sector is under threat from climate change, as the sea level rise may reduce availability of cropland by 24 percent in coastal divisions across growing seasons by 2045, a new report said yesterday.
“With two-thirds of the country at an elevation of less than 5 metres, Bangladesh is highly exposed to rising sea-levels, particularly the southern region. Rising sea-levels and salinisation are already being felt across coastal areas,” according to the Climate Smart Agriculture Investment Plan (CSAIP) Bangladesh.
The report, jointly prepared by the fisheries and livestock ministry and the World Bank, was launched at an event at the Krishibid Institution Bangladesh in Dhaka.
The CSAIP has been prepared to address the impacts of climate change on agriculture and prioritise investments to improve productivity, resilience and mitigation in the agriculture sector.
At the event, a $500 million Livestock and Dairy Development Project (LDDP) was rolled out to improve livestock and dairy production as well as to ensure better market access for two million farmers and small and medium-scale entrepreneurs. 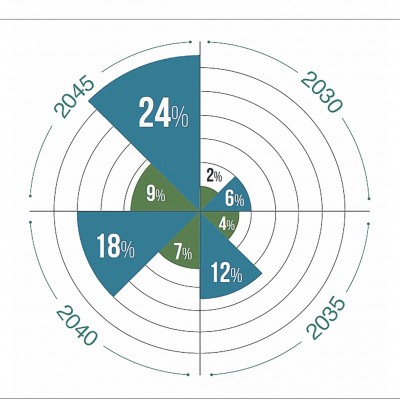 The WB said the LDDP is the largest livestock development project in its portfolio and the project would help stimulate private sector investment and the development of livestock value chains in Bangladesh.
According to the CSAIP, soil salinity has affected 62 percent of coastal land and salinity intrusion is predicted to advance 8kms north by 2030, reducing land availability for farming.
Apart from this, rising temperature will negatively impact yields of two main crops — aman and boro rice — and high water stress can lead to rice yield losses as high as 70 percent, the report said.
Bangladesh’s agricultural productivity growth has been among the highest in the world and supported around 87 percent of the country’s rural households.
“Climate change and sea-level rise pose a serious threat to Bangladesh’s impressive growth in agricultural productivity,” the WB said.
It said the agriculture sector is projected to stagnate under the business as usual scenario, and key national production targets by 2040 are likely to be missed unless action is taken.
“Due to sea-level rise and population growth, self-sufficiency targets for 2040 can be met only for rice and tubers,” the report said, adding that greenhouse gas emissions were expected to rise by 2 percent between 2015 and 2040.
In addition, water consumption will increase by 0.8-1.7 million litres per year exacerbating water scarcity, which in some areas will become even worse under climate change.
The report said production of non-rice crops will fall short of government targets by 56 percent under the business as usual scenario.
“In short, Bangladesh is on a slow burning platform,” said John Roome, WB’s South Asia Regional Director for Sustainable Development.
He said things need to change and there is a need to do things differently. “This is where the Climate Smart Agriculture Investment Plan can help.”
The CSAIP said Climate Smart Agriculture (CSA), which focuses on increasing productivity, strengthening resilience and reducing emissions, offers technologies that have the potential to set the sector on a resilient growth path that would dramatically close gaps towards 2040 and diversify production and value creation.
“CSA will allow Bangladesh to maintain rice self-sufficiency and greatly increase non-rice crop production,” said the report, adding CSA will help Bangladesh expand livestock and fish production as well as make agriculture less vulnerable to climate change.
Under the $809 million investment plan to tackle the impacts of climate change, five areas have been identified for investment: agricultural innovation, gender-sensitive development of homestead production, diversification, improving production, and value chain of milk and meat.
At the event, Agriculture Minister Muhammad Abdur Razzaque said the country clocked in 8.15 percent GDP growth in the last fiscal year. “We want to sustain it.”
He said the living standard of people still remains ‘awfully low’ despite peoples’ resilience and endeavour for better living.
“We have to acquire resilience with high standard of living.” Ashraf Ali Khan Khasru, state minister for fisheries and livestock, said winters were felt in December in the past. Now it is not being felt that much. “It appears that negative impacts of climate change have started falling in our region,” he said.
Dandan Chen, acting country director of the WB for Bangladesh and Bhutan, said being among the most vulnerable countries to climate change, Bangladesh must take urgent actions to build on its impressive track record in the agriculture sector.
“We are encouraged to see that the government considers climate-smart agriculture a strategic priority investment in response to changing climate.”
She said Bangladesh is one of the two pilot countries that took part in CSAIPs. The investment plan will help integrate climate change in the agriculture policy agenda. Fisheries and Livestock Secretary Raisul Alam Mondal also spoke.

August 19, 2022 by Admin
Business Desk : dhakamirror.com According to Lloyd’s List, one of the oldest shipping periodicals in the world, the Chattogram port has advanced three spots to become the 64th busiest port among the top 100 container ports in the world in terms of yearly container transport in 2021.The port occupied the 67th spot on the list ... Read more

August 17, 2022 by Admin
Business Desk : dhakamirror.com A subsidiary of the Norwegian-based Jotun Group, which produces paint and coatings, Jotun Bangladesh Limited (JBL) has invested $7.6 million to open its first plant inside the Meghna Industrial Economic Zone (MIEZ).Jotun Group, with operations in more than a hundred countries is one of the top manufacturers of paints and coatings ... Read more

Biman to fly to China for first time tomorrow

August 15, 2022 by Admin
Business Desk : dhakamirror.com A rooftop solar power plant with automatic cleaning system and a capacity of 3.5mw per day has been installed at Universal Jeans Ltd, a concern of Pacific Jeans, at the Chattogram EPZ, at a cost of $0.5 million as part of its green energy initiative. This 3.5mw electricity will meet 10% ... Read more

August 12, 2022 by Admin
Business Desk : dhakamirror.com To lessen the frequency and duration of power outages in the midst of an ongoing energy crisis, the Bangladeshi government has established staggered weekly holidays for industrial hubs. A notification establishing the area-wise weekly off was published by the Department of Inspection for Factories and Establishments under the Ministry of Labour ... Read more

August 12, 2022 by Admin
Business Desk : dhakamirror.com The Bangladesh China Chamber of Commerce and Industry (BCCCI) and Bangladesh International Arbitration Centre (BIAC) signed a memorandum of understanding (MoU) in Dhaka on Wednesday. Kaiser A Chowdhury, chief executive officer of the BIAC, and Al Mamun Mridha, acting secretary general of the BCCCI, signed the deal at the BIAC secretariat ... Read more

August 8, 2022 by Admin
Business Desk : dhakamirror.com In a recent program, the Hongkong and Shanghai Banking Corporation (HSBC) in Bangladesh facilitated social loan financing for brac. In accordance with the agreement, HSBC will provide money to BRAC in the amount of Tk 6.12 billion to carry out social development projects, said a press release. This is the country’s ... Read more

August 8, 2022 by Admin
Business Desk : dhakamirror.com In accordance with its distributor finance program, Standard Chartered Bangladesh has completed the country’s first automated over-the-weekend loan disbursement, according to a press release. The first client to receive the funds from a distributor financing loan on a weekend was Nestle Bangladesh, This enhancement will empower distributors, which are usually small ... Read more

August 8, 2022 by Admin
Business Desk : dhakamirror.com Meghna Aviation Ltd. in Bangladesh has inked a contract to buy two Bell helicopters—a Bell 505 and a Bell 407GXi—according to a statement from Bell Textron. Meghna Aviation was founded in 2011 which is a member of the Meghna Group of Industries, a significant conglomerate with headquarters in Bangladesh that employs ... Read more

August 4, 2022 by Admin
Business Desk : dhakamirror.com Hongkong and Shanghai Banking Corporation (HSBC) will introduce the “Female Entrepreneur Fund (FEF)” in Bangladesh today as part of its global commitment for assisting female entrepreneurs. According to a news release, the program’s goal is to enhance financial literacy, networking, and funding for women entrepreneurs in Bangladesh through the FEF project. ... Read more

August 2, 2022 by Admin
Tanmi Haque has been appointed Country Head of Retail Banking, HSBC Bangladesh, effective from Monday. Tanmi succeeds Ahmed Saiful Islam who is moving to a new regional role in Hongkong within the bank according to a press release. Before joining HSBC, Tanmi was Head of Priority and Wealth, Standard Chartered Bank and has also worked ... Read more

August 2, 2022 by Admin
Business Desk : dhakamirror.com The manufacturer of women’s underwear Nova Intima signed a contract yesterday with the Bangladesh Export Processing Zones Authority (Bepza) to invest $28 million in the Mirsharai Bepza economic zone of Chattogram. With this investment, 60 million units of underwear and related materials and accessories will be produced yearly, resulting in 5,625 ... Read more

July 26, 2022 by Admin
According to business executives, RAK Ceramics (Bangladesh) would invest Tk 95 crore to build a bathroom fittings plant with the ability to create 1,500 faucets, shower heads, and all other relevant accessories in an effort to offer less expensive alternatives to imports. On Thursday, the listed international ceramics company announced its choice in a filing ... Read more

July 26, 2022 by Admin
Mohammad Hedayet Ullah was recently promoted by Syngenta Bangladesh to the position of country general manager. Hedayet Ullah will simultaneously assume the role of a member of the Syngenta Asia Group Leadership Team, according to a press release, Hedayet replaces AMM Golam Towhid, who has been appointed as regional commercial operations lead for new farming ... Read more

July 13, 2022 by Admin
Brac Bank has enhanced the fund transfer limits on its Astha mobile app and Astha web interface to provide customers with a better digital banking experience.Account to account transfer limits in Astha has been increased to Tk 10 lakh daily. These new limits are applied to all four types of transfers – other bank transfers ... Read more

July 9, 2022 by Admin
Business Desk : dhakamirror.comThe CEO of Tesla and richest man in the world, Elon Musk, said that he was canceling his $44 billion agreement to purchase Twitter. According to Musk, the social media business violated numerous terms of the merger agreement, and as a result, the deal is being terminated. On the other hand. Twitter ... Read more

286 ISPs will be unplugged